‘Outside home, school is all he has’: Mother urges help as special schools remain shut 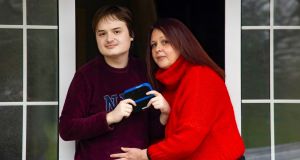 Government departments other than Education must step in to support children who will not return to school as planned on Thursday, a mother of two sons with special needs says.

“These families are in total crisis now,” said Jane Johnstone (51). “Has the Government any idea what all this is doing to the mental wellbeing of these children and their parents? There are long-term implications to all of this.”

“If they won’t open the schools will they increase respite services, home support services to give parents a night’s sleep? They all need to stop thinking just in the little box of education at this point. Right now we need to get supports into those families in crisis.”

Groups representing carers and children with special needs, said the crisis was “moving out of the realm of education”.

“We are facing a welfare and wellbeing crisis for these children and their families,” said a spokeswoman. “We need additional supports made available as a matter of urgency.”

While Evan is attending his adult day service – albeit curtailed during the pandemic – Daniel has not been to his special school in Enniscorthy since before Christmas.

His highly structured mornings are now empty. There were 20-minute countdowns to when he had to get up and to the school-bus arrival at 8.30am on the dot.

“Routine, familiarity and the same things happening at the same time each day are really important for him to feel safe,” said his mother.

“During the initial lockdown I was able to explain there was a scary virus and we can’t go to school. He understood, but he did regress.”

Once used to not going out, the easing of restrictions confused and distressed him. On one occasion last year his anxiety became so heightened he broke a window with his head.

The ongoing school closure is causing Daniel to “withdraw”. He is depressed, said Ms Johnstone, and “spending a lot of time on his own, a lot of time telling us to go away”.

“He’s frightened. Outside home, school is literally all he has. It’s more than education, it’s crucial. It’s his space, his safety, his identity, his little bit of independence. It’s his.

She worries tensions between the Department of Education and the unions are damaging relations between teachers and SNAs, and families.

“These are the people who have saved my life so many times but how do I approach that now. As a mother, my first loyalty is to my child. It’s like the Government and unions are pitting parents against teachers. I see them ripping each other apart on social media. It’s just awful to see that special relationship starting to break down.”

Coronavirus has brought a deeper crisis in the disability sector to a head, she said. “The whole social care system that should be supporting every family upon diagnosis – therapies and services – has never been properly delivered. So school is all these children have. When it’s gone there is nothing. Nothing for them.”

She noted special schools are open across the rest of Europe. “If they can do it, why can’t we? The department and the unions are up there fighting each other. They need to stop that and start supporting these families.”