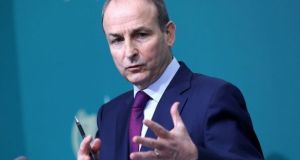 Taoiseach Micheál Martin’s video conference with EU leaders is focused on co-ordinating how to tackle coronavirus, vaccination strategies, and ‘what is happening with the UK variant in Ireland and other countries’. Photograph: Julien Behal/Handout/EPA

Taoiseach Micheál Martin is to brief fellow EU leaders on the Covid-19 situation in Ireland on Thursday after the country’s post-Christmas spike in infections caused alarm and fuelled calls for tougher travel restrictions within Europe.

The scale of the country’s rise from one of Europe’s least affected by the virus to a global hotspot caused deep concern about whether this could repeat in other countries if the more infectious UK variant took hold there – though the rise in infections in Ireland began as the country eased restrictions, before the British variant was detected.

The Thursday video conference between 27 EU leaders is focused on co-ordinating how to tackle coronavirus, vaccination strategies, and “what is happening with the UK variant in Ireland and other countries” will “feature at length”, an EU official said.

A string of European countries have tightened restrictions to curb the spread of the virus since December, with some imposing outright bans on flights from the UK and South Africa in response to new strains. EU member Finland, as well as Hong Kong, has included Ireland in its flight bans due to the prevalence of the new strain in the Republic.

“We are normally very much opposed to anything that is against freedom of movement in the EU, we believe it is a cornerstone of what the EU is made up of. But if this British mutation is so contagious, we might need to take some additional measures to stop it, to slow it down, otherwise the pressure on our hospitals, our intensive care units will be too big.”

In particular, Germany is backing stronger action to curb the spread of the virus, with chancellor Angela Merkel warning that pan-EU co-ordination on tougher pandemic controls is essential to avoid the risk of a repeat of the border closures seen last spring.

“If countries were to go completely different ways . . . then we would also have to be prepared to go to extremes and say: then we would have to reintroduce border controls. We don’t want that,” Dr Merkel told journalists ahead of the conference.

“We can’t stand by and watch the contamination simply come about because other countries go completely different ways.”

“He looked at the numbers from Ireland and knew we had to act quickly to prevent something similar here,” according to a German chancellery source.

“Things were shooting up vertically, we’d not seen that before, so we had to act,” said a senior German government official. “It wasn’t just a tabloid scare story, what we saw in Ireland and London was alarming.”

Though the rate of infections is now declining, Ireland is still the second-worst in the EU on the European Centre for Disease Prevention and Control’s traffic light chart, at 25 times over the threshold for the most severe “red” category. Instances of the British variant have been detected in many other EU countries, but it is believed to be less prevalent than in Ireland where it is now estimated to account for more than 45 per cent of infections.

The potential for new mutations of the virus arising that could be resistant to vaccines has caused particular alarm, leading the European Commission to call for all non-essential travel to be “strongly discouraged”.