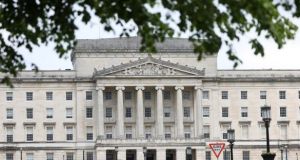 Members of the British military are to be brought in to the North’s hospitals to help under-pressure healthcare workers caring for patients with Covid-19.

More than 100 medically trained technicians are to provide assistance in Northern Ireland and will primarily support nursing staff in hospital wards.

Announcing the decision on Wednesday, the North’s Minister for Health, Robin Swann, said this was a “hugely important resource” which was “coming at a particularly challenging and critical period for our health service” and would provided “valuable and critical support of a skill set that we currently need.”

Speaking to reporters at a press conference at Stormont on Wednesday afternoon, he told reporters that he “sincerely” hoped it would “not be viewed as a divisive decision, because I can assure you it’s not.

“Our armed forces have medical expertise, and it would have been an abdication of responsibility on my part if we didn’t avail of that,” he said.

The British army has already provided some assistance in the North during the pandemic around logistics and transport, but this is the first time members of the military will have been deployed in hospitals.

Asked if he was expecting any resistance to the use of the military in hospitals, Mr Swann said he sincerely hoped not, and the move should only be seen as “the opportunity to support our health service at a critical time.

“That’s why I made the request I did ... not to make any political point, it’s not about any presentational point either, it’s about providing that critical support to those people working in our health service who are under pressure and who will remain under pressure for the next number of weeks.”

Referring to the current situation in the North’s hospitals, Mr Swann said he hoped the peak had now been reached in terms of hospital inpatients, but the number of patients requiring critical care was “still likely to increase further.”

By the end of Tuesday more than 160,000 doses of the Covid-19 vaccine had been administered, Mr Swann said.

At the time, Ms O’Neill said she had “raised the sensitivities of British military intervention” directly with the North’s Secretary of State, Brandon Lewis.

In a statement following the announcement on Wednesday, Sinn Féin said the Minister had “made a request for staffing support from the British Ministry of Defence.

“Sinn Féin’s priority throughout the pandemic has been to save lives, keep people safe and protect the health service.

“We do not rule out any measures to do so, and any effort to make the threat posed by Covid-19 into a green and orange issue is divisive and a distraction,” the statement said.

Earlier, the North’s Department of Health said a further 22 people with Covid-19 have died in Northern Ireland, bringing the total number of fatalities to 1,671.

A total of 905 new cases of the virus were confirmed in the last 24 hours.

Hospitals in Northern Ireland were operating at 96 per cent capacity on Wednesday, with 832 people with coronavirus receiving hospital treatment and 67 in intensive care.

Meanwhile teaching unions told MLAs on the Stormont education committee on Wednesday that prioritising the vaccination of teachers would allow schools to reopen sooner.

“We are calling for all teachers and education staff to be prioritised for the coronavirus vaccine, we believe this measure will save lives but it will also help get children back to school safer and sooner than we would otherwise,” said Justin McCamphill from the NASUWT union.

Schools in Northern Ireland are currently closed to all but vulnerable children and the children of key workers, but special schools remain open.

Mr McCamphill told MLAs that teachers were at greater risk of contracting the virus than the average member of the public, and this risk was heightened for staff at special schools.

“It is right and proper that teachers in special schools are treated in the same way as all those who work within health and social care as they are putting themselves at high risk for the greater good and to ensure that vulnerable young people have respite,” said Mr McCamphill.

“If we prioritise the vaccine everyone within education will be back at work quicker and more safely,” he said.