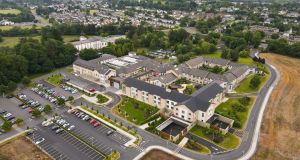 A total of 28 staff and 26 residents have been infected with Covid-19 in the outbreak at Milford Care Centre in Limerick city. Photograph: Diarmuid Greene

The manager of a Limerick nursing home that suffered seven Covid-19 deaths and 26 positive cases among residents since Christmas has blamed the “explosion” of infections in the county.

Pat Quinlan, chief executive of Milford Care Centre in Limerick city, said more than one-third of the nursing home’s residents and more than one-quarter of the facility’s staff were infected in the outbreak that struck the care facility in the third wave of the pandemic.

Mr Quinlan said Castletroy nursing home “got very badly hit” with 28 of more than 100 staff and 26 of the 69 residents at the care facility infected in an outbreak first detected on December 28th when a number of residents were confirmed as testing positive.

“We are putting it down to the fact that things took off so rapidly in the community,” he said.

The county had, as of Monday, the fifth highest 14-day incidence rate of the disease in the State with 1,706 cases per 100,000 people, a 13-fold increase since the start of December.

“We just feel it is because of the external environment and what was happening out there,” he said.

“Everything had been fine and then the explosion happened in the Limerick area and unfortunately it got into Milford, despite our best efforts.”

“It is soul-destroying. The whole thing is so challenging,” he added.

He said the nursing home managed staff shortages caused by illness by redeploying staff and employees working additional shifts. Other staff will return to work by the end of this week.

“Everyone has rolled up their sleeves. We have managed to work our way through it and hopefully we are coming out the other end. It is all starting to fall back into place,” he said.

Covid-19 vaccines were administered to all residents who had not been infected by the disease and staff associated with the nursing home on Thursday and Friday of last week.

“It was as if the person didn’t have Covid. We had nothing since then,” said Mr Quinlan.

“You are doing regular swabbing and every time you are hoping that everything is okay but you don’t know. You can’t actually make any assumptions.”

The third wave of record infections continues to affect the nursing home sector badly. There were 44 new Covid-19 outbreaks reported in nursing homes in the week ending January 16th, bringing to 150 the number of open outbreaks among the 580 nursing homes across the State.

The total number of reported deaths linked to nursing home outbreaks rose by 81 in the week.

An outbreak is defined as two more cases of infection and is not declared closed until 28 days have passed without a new positive case being detected.