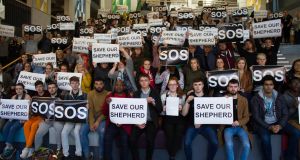 Students at Dublin City University are campaigning to prevent the deportation of a scholarship student who is mid-way through his college degree.

Shepherd Machaya, originally from Zimbabwe, has been living in the direct provision for several years and obtained a place at DCU under its “university of sanctuary” programme.

His application for asylum has been rejected by authorities and the union believes he is due to be deported over the coming days.

The union’s president Vito Moloney Burke said Shepherd Machaya was a “model citizen” through his commitment to study and his willingness to contribute to society.

Minister @CharlieFlanagan, we’re outside. Please do what you can to revoke Shepherd Machaya’s deportation order. #SaveOurShepherd #SOS pic.twitter.com/fpChggr86F

“We urge Minister Flanagan to prevent him from being forcibly returned to a place where he was tortured and his best friend was murdered,” Mr Moloney Burke said.

He said the student faced the threat of “torture from political groups that he came here to escape” and sending him back to Zimbabwe is in no one’s best interest.

The union has launched a “save our Shepherd” campaign online to help convince authorities to revoke his planned deportation.

The campaign comes at a time when schools and education institutions are mobilising to help prevent the deportation of students served with deportation orders.

It set up a public petition on Tuesday requesting that Mr Flanagan revoke the deportation order. By Thursday afternoon it had attracted more than 35,000 signatures.

Last week, Offaly teenager Nonso Muojeke was spared from deportation to Nigeria following a campaign by his school - Tullamore College - and the wider community.

The Department of Justice confirmed last week that a deportation order against the 14-year-old and his family had been revoked.