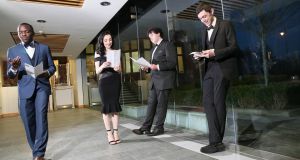 A law student from Co Mayo has won The Irish Times Debate 2018 grand final on her 22nd birthday. Amy Crean from Claremorris is studying law and social justice at UCD and is a member of the university’s L&H society.

The winning team was from the same university and included medical student Cian Leahy, 24, from Julianstown in Co Meath and Aodhan Peelo, 22, from Castleknock in Co Dublin studying law and philosophy.

They argued that Ireland had failed its youth during a black tie event at Queen’s University in Belfast. The winners topped a field whittled down from 300 students to 12.

Ms Crean said debating helped change minds. “I am so happy to be part of that and an environment shaping conversations, ” she said.

In the 58th final of the Irish Times debate the proposers of the motion argued that the housing crisis and lack of mental health provision showed Ireland’s youth had lost out.

They recalled young people unable to attend university because they could not afford the rent or living in cramped accommodation so cold their teeth chattered.

Ms Crean said: “We cling to others like sand to wet feet, we don’t know who we are.”

From a scratched emerald to a leaking boat sailing against the wind the characterisation of the country was colourful. Americanisation of culture was bemoaned and the lack of an Irish equivalent of Bollywood.

Previous winners of the debate include Belfast Court of Appeal judge Mr Justice Deeny and Friday’s competition was chaired by his fellow judge Lord Justice Stephens. He praised the quality of the entrants and spoke of the role of logic versus emotion.

Winning team member Mr Leahy was runner up two years ago. “This was my last chance at the competition so it was very nice to get that,” he said.

Mr Peelo added: “It is the only activity that people do that as soon as you give a speech all of your friends rally around you in the most supportive way I have ever seen.

“I just think it is a really nice opportunity to give a talk, to have a laugh to put an idea across in a really nice kind of a community.”

Students were competing for a prize of a debating tour around the US.

The adjudicators were Irish Times editor Paul O’Neill, Queen’s Professor Adrienne Scullion, Pro Vice-Chancellor for Arts, Humanities and Social Sciences; Margaret Elliott who is a governor of the Irish Times Trust and Professor Brent Northup, the chair of communications at Carroll College in Montana.

The other judge was member of the winning team in 2016, Ross O’Mahony.

The Irish Times Debate is the oldest continuous inter-varsity debating competition in Ireland, having been set up on an all-island basis in 1960 to promote excellence in oratory and debating.

Since 1980 the National Parliamentary Debate Association of America has invited the winners of The Irish Times Debate to participate in a debating tour of the United States.