New building for Greystones school operating out of tennis clubhouse 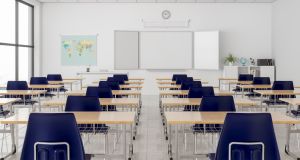 A new 1,000-pupil secondary school is to be built in Greystones, Co Wicklow, following the sale of a 11.5 acre site on the edge of the town to the Department of Education. Photograph: iStock

A new 1,000-pupil secondary school is set to be built in Greystones, Co Wicklow, following the sale of a 11.5 acre site on the edge of the town to the Department of Education.

Greystones Community College, which opened in August last, has been operating on a temporary basis out of a lawn tennis clubhouse.

Cairn Homes confirmed that it sold a site in the Charlesland area of the town to the department for an undisclosed sum, subject to receipt of planning permission.

The developer said it expects planning permission will be obtained later this year, which would pave the way for opening to students in September 2023.

The building is set to have 50 classrooms, a 1,000 square metre PE hall and gym and six outdoor hard play court areas.

Cairn said it will design the school and environs in conjunction with the department.

Minister for Health Stephen Donnelly, a Fianna Fáil TD for Wicklow, welcomed the announcement that a site had been secured for the school.

“It’s absolutely fantastic news that a deal has finally been done to buy a site for Greystones Community College,” he said. “It gives the staff and pupils much -needed certainty after a year in which they have been left in limbo for too long.”

He said the main focus now will be on making sure the school is built as quickly as possible so the “students will have the state-of-the-art facility they deserve in September 2023”.

Greystones Community College, a multi-denominational school, operates under the patronage of Kildare Wicklow Education and Training Board.

A shortage of secondary school places has become a major issue in the area in recent years. Schools have reported that they are significantly oversubscribed and have had to turn away dozens of applicants.

The opening of Greystones Community College will ease pressure on school places with the enrolment of about 96 new students a year as the school expands.

The school had been due to share the premises of the newly-built Greystones Community National School on a temporary basis.

This, however, was not possible due to an ongoing dispute between the department and building firm WBS relating to fire safety issues at the new building

A conciliation process between the builder and department in relation to these issues is due to be completed by the end of the current school year.

The secondary school is likely to leave the grounds of the tennis club at the end of the current academic year and temporarily relocate to the the grounds of Greystones Rugby Club or Éire Óg GAA club.