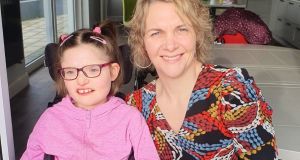 Angelina Hynes and Zoe: ‘It took years for Zoe to develop the ability to feed herself with a spoon... she lost it all within weeks’

In the world of special needs education, the children at Rosedale special school have some of the highest needs in the country. They are also among those suffering most from continued school closures.

“We saw a huge loss in skills,” says school principal Breda O’Connell. “Children who had learned to be able to sit up and just attend to something weren’t able to any longer. Some had learned to tolerate other people, regulate their own behaviour or get to sleep at night.

“In some cases, they lost years of development. One family member estimated that their son had lost five years’ worth of progress.”

O’Connell says she would like to reopen the school doors to its 65 pupils with severe and profound disabilities.

As things stand, the school has no permission from the Department of Education to do so.

The idea of reopening schools on a voluntary basis has been floated at a senior levels in discussions in recent days.

She feels it is a viable option where a critical mass of staff are comfortable returning.

“We’d love to offer something,” she says. “I think a reasonable number of our staff would want to return and we could offer some service. It’s very distressing and frustrating to hear what’s happening to our families.”

Most of Rosedale’s pupils are severely disabled and, in many cases, have complex medical needs and need specialised equipment and wheelchairs.

Some have challenging behaviour, while others are non-verbal and incontinent.

For Luke (14), Rosedale school is his entire world.

He is severely and profoundly disabled and cannot talk. When he gets frustrated, he resorts to banging his head.

His mother, Jess Joyce, says Luke cannot understand why he is not going to school.

“This morning, his eyes were searching me to see what was happening, as if to say, why aren’t things the way they should be? In the shower, he walloped his head three times off the shower wall to the point where he was bleeding. He’s tormented by it all.”

Angelina Hynes’s daughter Zoe (9) is is still trying to regain vital skills she lost during the lockdown last year.

She is diagnosed with a rare genetic disorder and is intellectually disabled, non-verbal and incontinent.

“It took years for Zoe to develop the ability to feed herself with a spoon,” Ms Hynes said.

“Month after month of repetitive work, day in day out, with dedicated support... When the schools closed last year, she lost it all within weeks.”

If the school reopened – even for one day a week – she says the family would grab it with both hands.

Lorraine Tuck’s son Manus is almost eight years of age. He has severe autism and issues such as epilepsy.

School is a lifeline for him, she says; the longer he is off, the worse his challenging behaviours become.

“If he gets to school, he burns off energy. The staff are wonderful. He loves the outdoors. He gets his therapies, has his feet bathed, gets his lunch and is spoonfed. The children there are blessed.”

If the school was to reopen on a voluntary basis, she says she would be thrilled.

“I would be 100 per cent comfortable sending him back to school... we don’t want to upset unions or teachers. They have a huge heart and love what they do. Many want to return. If this is an option for them on a voluntary basis, that would be wonderful.”