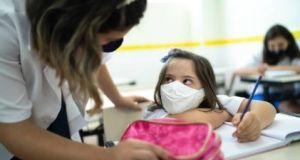 Advocacy organisations AsIAm, Down Syndrome Ireland, Family Carers Ireland and Inclusion Ireland criticised the lack of clarity being provided to children with additional needs and their guardians. File photograph: Getty

Four advocacy organisations have expressed “deep concern” at the prospects that schools for children with additional needs will not reopen as planned next week.

The groups said they had received calls and emails from many “deeply upset and worried families” over what they termed the “deep confusion” that has been sown over the issue.

The reopening has been thrown into doubt despite a statement from the Department of Education that thousands of children with additional needs were due to return to special classes on alternate days from next Thursday.

Mainstream schools were due to be permitted to provide for in-school tuition for certain vulnerable or disadvantaged students, once they have the capacity to do so.

This was set to include, for example, students at risk due to development issues, features of the family or community life, or other factors which might contribute to educational disadvantage.

The deal was set to see thousands of special needs assistants and resource teachers return to primary and special schools on a full-time basis.

However, Fórsa, the union which represents many of Ireland’s special needs assistants (SNAs), has contradicted the department’s suggestion and stated a deal is not complete.

In a statement last night, Fórsa said talks with the Department of Education on the reopening of some schools and classes for children with additional needs from next Thursday had not concluded and a number of issues remained unresolved.

On Friday afternoon, letters were sent by the department to primary school principals outlining the plans agreed with Fórsa and the INTO.

In its statement last night, Fórsa said one of the outstanding areas requiring agreement was that of enhanced safety measures.

These included the safety of SNAs at high risk of Covid-19 infection and the absence of childcare arrangements.

In response, advocacy organisations AsIAm, Down Syndrome Ireland, Family Carers Ireland and Inclusion Ireland criticised the lack of clarity being provided to children with additional needs and their guardians.

In a statement, the four organisations said they had received calls and emails from many “deeply upset and worried families”.

They stated: “Children with additional needs, and their parents, went to bed last night confident that the week ahead would see a much needed return to the classroom, and woke up this morning to mixed messages and deep confusion.

“Our young people have suffered greatly during the Covid-19 pandemic. Many students with additional needs are unable to learn remotely and have lost core skills in communication, personal care and social interaction which have a lifelong impact.

“At a time when families are struggling to cope with supporting their children on a 24/7 basis, often whilst juggling work and other care commitments, it is totally unacceptable for stakeholders to get their hopes up or to give mixed messages.

“Our children should be a central stakeholder in the return to school as they are the thousands of children with additional needs who will benefit from a reopening.”