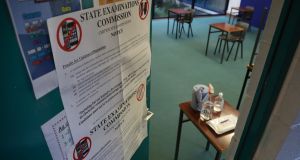 Talks over contingency plans for the Leaving Cert are to intensify this week amid growing expectation that a formal decision on the future of the exams will be made shortly. Photograph: Nick Bradshaw/The Irish Times

Most children will not be back in school next month and may not return to the classroom until close to Easter, according to Government sources.

The Government’s Cabinet committee on Covid-19 is due to receive fresh guidance over the reopening schools from public health experts ahead of a Cabinet meeting on Tuesday.

While a full return to school is unlikely until mid to late March, sources say there remains a determination to reopen special education as a priority in February if virus transmission rates continue to fall.

Taoiseach Micheál Martin said at the weekend that he believed schools will most likely reopen in a phased way, but not all students would be back at school by St Patrick’s Day.

Meanwhile, talks over contingency plans for the Leaving Cert are to intensify this week amid growing expectation that a formal decision on the future of the exams will be made shortly.

The Department of Education is due to meet with secondary education partners to discuss “further possible options” for the exams.

A spokesman for the Minister declined to comment on when a decision over the future of the Leaving Cert will be made beyond stating that the situation was “fluid”.

The Government is coming under pressure from opposition parties to clarify its plans for the Leaving Cert.

Labour Party leader Alan Kelly TD said he expects the exams will now be cancelled and has called for a decision to be made by February 1st.

Up until recently, Minister for Education Norma Foley said it was the Government’s firm intention to press ahead with a “traditional” Leaving Cert.

However, the continued closure of schools means this will be challenging given looming deadlines for oral and practical exams and concern over inequality of access to education.

Last year, the written Leaving Cert exams in June were cancelled and replaced by a system of calculated grades, which involved teachers assessing their own students.

Any decision to press ahead with a similar model will require the support of teachers’ unions.

He told RTÉ on Sunday that it remained the union’s preference that the exams should go ahead, with alterations where necessary.

In relation to the use of calculated grades, he said teachers were in a “worse position this year” in terms of the lack of data available in relation to students’ performance.

Sources at meeting of the union’s 180-member central executive committee at the weekend, however, said there was a recognition that the exams may not be able to go ahead and a sub-committee has been established to examine alternatives.

Discussions over the phased reopening of schools are also due to get underway this week.

The Taoiseach said at the weekend that the return of special education remains the priority of the Government in the coming weeks, followed by the phased return of other groups.

Mr Martin said there would not a “the one big bang approach” because of the transmissibility of the virus.

The number of Covid-19 cases would need to reduce in order for students to return to in-classroom education, he said, though he declined to say at what level.

Schools continued to operate when cases reached a high of 1,200 a day in October last year, prior to the imposition of Level 5 restrictions.

Mr Martin said that while schools are safe and controlled settings, the mass mobilisation of people around them was an issue.

Ms Foley has confirmed that her department has made representations to the Department of Health about prioritising teachers and school staff for vaccination.

However, sources have played down the likelihood that teachers outside of at-risk groups could be pushed up the priority list, on the basis that it would delay vaccination for other priority groups.

ASTI members, meanwhile, have reported a “high level of concern” regarding new Covid-19 variants and the re-opening of schools at its central executive meeting on Saturday.

The union said it will undertake a survey of its members on their views regarding school safety and the reopening of schools.