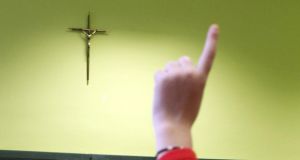 “The Minister’s intention is to press ahead on these complex issues as quickly as possible,” a spokesman said. Photograph: Getty Images

Minister for Education Richard Bruton is to engage in a new round of consulations over plans to limit or remove the “baptism barrier” in school admissions .

The issue was at the centre of debate this week when when Fine Gael TDs and Senators asked Mr Bruton to re-examine plans, which could have unintended implications for some groups, particularly Protestants, they say.

At present, oversubscribed schools are permitted to discriminate on the basis of religion in their admissions policies under the Equal Status Act (2000). This has become a highly contentious issue, given that more than 90 per cent of primary schools remain under the patronage of the Catholic Church or other religious organisations.

While there has been a consulation process over recent months, Mr Bruton plans to hold roundtable meetings with key education partners and religious groups to discuss his proposals over the coming weeks.

“Once the consultation period has ended, the Minister will set out the next steps to develop and implement measures to deal with this issue,” a spokesman for Mr Bruton said.

“The Minister’s intention is to press ahead on these complex issues as quickly as possible.”

He added that no one should pretend that these issues are simple, or that there is an easy fix that solves everything and leaves no possible unintended consequences.

“In particular, as reforms are developed we must strive to avoid impacts on the rights of minority religions,” the spokesman added. “As the Minister said, we should live and let live, and aim for the greatest good for the greatest number.”

Last January, Mr Bruton issued a series of options as part of a consultation process on how to tackle the issue.

The options include allowing schools to favour children of their own religion only when those children live within the school’s catchment area, or when that school is their nearest one; a quota-based system; and an outright ban on using religion as a factor in admissions.

The catchment-area approach has emerged as a front runner to date, with support from Catholic bodies, Fianna Fáil and Labour. This would mean religious schools could not discriminate in favour of a member of their own faith from outside their catchment area ahead of a locally based child outside their faith.