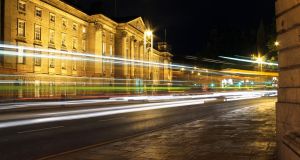 Trinity College Dublin is one of three Irish universities which feature in the Reuters list of Europe’s top-100 most innovative universities. Photograph: iStock

Ireland boasts more top-100 innovative universities per capita than any other country in Europe, according to a new ranking.

That is the conclusion of Reuters’ second annual ranking of Europe’s most innovative universities, a list that identifies and ranks the educational institutions doing the most to advance science, invent new technologies, and help drive the global economy.

On the same per-capita basis, the second most innovative country on the list is Denmark, followed by Belgium, Switzerland and the Netherlands.

Overall, most innovative university in Europe, for the second year running, is Belgium’s KU Leuven.

The nearly 600-year-old institution was founded by Pope Martin V, but today it is better known for technology than theology: KU Leuven maintains one of the largest independent research and development organisations on the planet.

The university’s research spending exceeded €454 million during 2015, and its patent portfolio includes 586 active families, each one representing an invention protected in multiple countries.

How does a relatively small Catholic university out-innovate bigger, better-known institutions across Europe?

KU Leuven earned its first-place rank, in part, by producing a high volume of influential inventions. Its researchers submit more patents than most other universities on the continent, and outside researchers frequently cite KU Leuven inventions in their own patent applications.

Those are key criteria in Reuters’ ranking of Europe’s most innovative universities, which was compiled in partnership with Clarivate Analytics, and is based on proprietary data and analysis of indicators including patent filings and research paper citations.

The second most innovative university in Europe is Imperial College London, an institution whose researchers have been responsible for the discovery of penicillin, the development of holography and the invention of fibre optics.

The third-place University of Cambridge has been associated with 91 Nobel Laureates during its 800-year history.

And the fourth-place Technical University of Munich has spun off more than 800 companies since 1990, including a variety of high-tech startups in industries including renewable energy, semiconductors and nanotechnology.

Overall, the countries that dominate European business and politics dominate the ranking of Europe’s most innovative universities.

German universities account for 23 of the 100 institutions on the list, more than any other country, and the United Kingdom comes in second, tied with France, each with 17 institutions.

But those three countries are also among the most populous and richest countries on the continent.

Control for those factors, and it turns out that countries such as the Republic often outperform big ones.

Germany, the United Kingdom and France rank in the middle of the pack, an indication that they may be underperforming compared with their smaller neighbours: on a per capita basis, none of those countries has half as many top 100 universities than Ireland.

The same trends hold true if you look at national economies. According to the International Monetary Fund, in 2016 Germany’s gross domestic product exceeded $3.49 trillion (€3.2tn) –11 times larger than Ireland at $307 billion, yet Germany has only seven times as many top-100 innovative universities.

Russia is Europe’s most populous country and has the region’s fifth largest economy, yet none of its universities count among the most innovative.

Other notable absences include any universities from Ukraine or Romania – a fact that reveals another divide between Western and Eastern Europe.