Student start-ups: why colleges are encouraging students to be entrepreneurs

Skills linked to entrepreneurship – problem-solving, creativity, risk-taking – are in high demand among employers 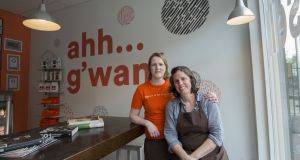 Elaine Coholan, left and Jenny Synott founders of Dublin Cookie Company on Thomas Street, Dublin: ‘We were motivated by the idea of creating something out of nothing.’ Photograph: Brenda Fitzsimons

Colleges are increasingly offering academic courses in entrepreneurship, start-up workshops and summer programmes for students seeking to start their own companies.

There are now hundreds of examples of student start-ups and no shortage of high-flying success stories.

Eamonn Fallon was a student at Trinity College Dublin when he and his brother Brian founded housing website Daft.ie.

More recently, Irish businesses such as Dog Day Media and FoodCloud, both of which have been busy making waves internationally, were founded and run by college students here.

For colleges, the skill-sets traditionally associated with entrepreneurship – problem-solving, creativity, risk-taking – are increasingly in demand among employers.

As a result, they have become engaged in a kind of innovation arms race with a huge growth in the number of modules and courses on entrepreneurship, as well as on-campus business incubators and supports.

A recent study carried out by researchers at DCU found that while almost half of students still plan to work in a medium or large sized business after leaving college, almost a third see themselves as entrepreneurs or working in their own business five years after graduation.

Cork Institute of Technology (CIT) is among the colleges seeing the effects of their entrepreneurial efforts. Carole O’Leary, industry liaison manager at CIT, says the proportion of graduates who are self-employed after they graduate has doubled in the past five years.

If international measures are anything to go by, Ireland appears to be doing something special in relation to fostering student start-ups.

In 2016, a survey by US company Pitchbook found that both Trinity College and UCD featured among the top 10 European universities producing entrepreneurs, raising the most investment revenue.

While the Government’s 2017 action plan for education includes a goal to create a stronger focus on entrepreneurship, creativity and innovation, many in the sector argue that it not backed up by enough support.

While there has been some funding for start-ups based on academic research, there has been no direct funding to universities to support student entrepreneurship, says Dr John Whelan of Trinity College Dublin.

As a result, universities are using donations from charitable foundations to fund start-up accelerators.

Trinity – along with UCC and NUI Galway – also recently received a grant from the Blackstone Charitable Foundation to provide year-round support through the “Blackstone LaunchPad” programme. This is a campus-based entrepreneurship program designed to support and mentor students, staff and alumni. Irish universities are the first outside of the US to receive such support.

Dr Whelan says Ireland is lagging behind the UK where the vast majority of third-level institutes offer students entrepreneurship support of some kind.

Relying on charitable institutions to provide funding to entrepreneurship activities on campus can leave institutes of technology and smaller colleges – such as CIT – out in the cold.

“Last year we won every single prize in the Student Enterprise Awards . . . but when the big companies are coming in, they don’t come to us, they come to the universities,” says Carole O’Leary from CIT.

“We would love a space for the students where they could sit, maybe have some 3-D printers and do presentations. We would love for a big company to come in and sponsor us. But they’re not coming to us.”

Aside from the economic benefit generated by entrepreneurial activities, many academics say there are very tangible educational benefits to offering entrepreneurship on campus.

It’s not possible, nor it is expected, that every student will become an entrepreneur – but even those intending to work in other fields stand to benefit by learning some of the skills associated with running your own business.

“Initially when we started this we were looking for those real outliers in business, the ones that were going to start the next big thing,” says Aidan Browne, incubator manager at Dundalk Institute of Technology (DKIT).

“But what we’ve found, and the feedback that we get from the students that have engaged with us, is that it gives essential skill-sets that are very important, and it’s those skill-sets that employers are looking for. The skill-sets you typically find in entrepreneurs include problem-solving, creativity, risk-taking, all those sorts of traits.

“Not everyone can be an entrepreneur, not everyone will want that, but we’re creating potential employees that go beyond that subject matter and giving them a leg up when it comes to competing with other students in finding jobs,” he says.

The academy was originally set up to provide alternative job options for PhD students – of which there was a far greater number than there were tenured academic positions – but it has since become much more.

“Everyone expects the 19-year-old entrepreneur in the garage, but not necessarily the person who has had 15 years of a successful career.

“A lot of people on our Springboard courses have taken voluntary redundancies. We’ve had people there with 20 years’ experience in corporate banking, who decided they wanted to start their own business. And what’s to say that the 19-year-old tech entrepreneur is any more valuable than them?”

Ultimately, those working with student entrepreneurs see the investment they raise, the jobs they create and their economic benefits – and they want secure funding for their facilities.

“It’s great to get a grant like our funding from Blackstone, but it’s to run out next year,” says Dr Whelan of Trinity College.

“The Government has a role here, and it will gain the results. We would always be open to corporate support but it’s clearer strategically if it comes from the Government. The real answer here is for it to be co-funded by industry. We will see results from this,” he says.

The plans for building Ireland’s first cookie empire were born in an entrepreneurial class at UCD’s Innovation Academy.

“We were in jobs we didn’t like, or between jobs,” says Elaine Coholan, who co-founded the business with her wife Jenny Synnott three years ago.

Synnott signed up to UCD’s postgraduate course in innovation and entrepreneurship as a mature student.

“The programme was kind of unique in that it wasn’t like going to college, it was more like a peer mentor group,” explains Coholan.

“Everyone had different experience going in, whether it was in food or in construction, and everyone brought a unique perspective and insight to the group.”

“It kept being repeated that successful start-ups were based on what the founders were passionate about, and the more we discussed it, the more we kept coming back to food,” she says.

“The group was constantly challenging our assumptions and expectations and it also gave us the confidence to go ahead with the idea.”

The couple first brought their product to the public in farmers’ markets around the country three years ago.

They’re not stopping there. Now Synnott and Coholan are making plans to turn their cookies into an international brand, bring retail products to the market, and add a second premises to their burgeoning business.

Coholan notes that although they might have set up the Dublin Cookie Company without the Innovation Academy’s support, the experience taught them a lot.

“The Innovation Academy showed us that there’s room for innovation in every part of your business, it doesn’t have to be with the big bang idea,” she says.

“We learned to try to push innovation and creativity throughout our business, and look at every little decision we make like that.”

However, she also notes the challenges involved with starting their own business.

“The entrepreneurial life isn’t for everyone,” she adds. “We don’t have kids or mortgages, and this was an itch we needed to scratch. But we knew then that whether it had been a success or a failure, we wouldn’t regret that we did it – and we don’t.”

Encouraging entrepreneurs: what some colleges are doing to support students

The university has a range of entrepreneurship programmes under the auspices of the Ryan Academy, which is located at the Citywest Business Campus in Dublin 24.

Its Propeller Venture, Female High Fliers and Start-up Scale-up incubation programmes can be accessed by non-students. However it also runs the UStart student accelerator, a part-time summer programme which offers business development funding, mentoring and office space to successful candidates.

The Ignite graduate business programme supports recent graduates from all third-level institutions in turning ideas into successful businesses. It offers workshops, mentorship, funding and office accommodation to 10 start-ups per year.

The university runs LaunchBox, a three-month summer accelerator for student start-ups, and LaunchPad, year-long support and mentorship for students thinking about starting their own business. This year they are also launching a pilot mentoring scheme for female students who are considering setting up their own business to improve gender diversity in their programmes.

As well as a postgraduate certificate course in Innovation, Entrepreneurship and Enterprise run by the Innovation Academy, UCD runs an annual Start-up Stars contest for groups of UCD students across all disciplines who have an idea for a business. Successful applicants participate in a 4-week programme of mentoring and workshops at NovaUCD, as well as receiving funding and office space.