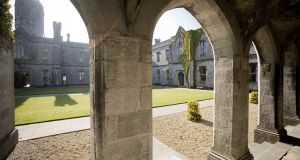 NUI Galway has confirmed that legal proceedings taken against the university by four female lecturers over alleged gender discrimination have been adjourned to allow for mediation.

NUI Galway (NUIG) has confirmed that legal proceedings taken against the university by four female lecturers over alleged gender discrimination have been adjourned to allow for mediation.

The development has been welcomed by former NUIG lecturer Dr Micheline Sheehy-Skeffington, whose own discrimination case against the university prompted the legal action by the four lecturers.

The four - Dr Sylvie Lannegrand, Dr Róisín Healy, Dr Margaret Hodgins and Dr Adrienne Gorman – claim they were treated less favourably by NUIG on grounds of gender and/or family status during their unsuccessful applications for promotion to senior lecturer positions.

The four women applied for the positions during the promotion round run between October 2008 and April 2009.

A trial of preliminary legal issues relating to the case taken by the four women was due to be heard at the High Court on Thursday.

However, in a statement on Wednesday evening, NUIG said “the plaintiff’s counsel made an application in court for an adjournment on Tuesday morning for the purposes of the parties going to mediation, which is a confidential process.

“The university is not in a position to make any further comment at this time, nor would it be appropriate for the university to do so.”

The university has denied the claims made by the four lecturers.

It said last year that the women had no cause of action against it in the High Court and that the Workplace Relations Commission was the proper body for determining complaints of employment discrimination.

A fifth female lecturer is pursuing a gender discrimination case against NUIG in the Labour Court, with the support of the Irish Federation of University Teachers (IFUT). A hearing on this case is listed for May 31st.

IFUT general secretary-designate Joan Donegan said it was disappointing that there had been such a delay in hearing a case taken through the industrial relations route.

This sent out a message to female academics that the industrial relations route was “not user-friendly”, she said, adding that the option of a legal route was both costly and stressful.

NUIG’s equality record came under the spotlight in 2014, when the Equality Tribunal found that Dr Sheehy-Skeffington had been discriminated against on grounds of gender - during the same 2008-2009 promotion round.

The college was ordered to promote Dr Sheehy-Skeffington, to award her €70,000 and to review its appointments system.

An equality taskforce established after Dr Sheehy-Skeffington’s case recommended mandatory gender quotas for senior academic posts at NUIG, which the university’s governing body agreed to in May 2016

NUIG said on Wednesday night that “in the past number of months, the university had implemented new policies linked to equality and diversity, including a minimum of 40 per cent representation of women . . . on college decision-making committees and all interview panels”.

The university has also appointed Prof Anne Scott as vice-president for equality and diversity, the first appointment of its kind in an Irish university.

However, Dr Sheehy-Skeffington said that there was “little evidence to date” that gender quotas were being implemented.