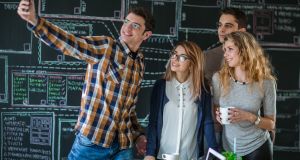 For the third year in a row, graduates who are about to embark on a job hunt have reason to hope.

Of course, some industries are stronger than others – there are vacancies aplenty in IT, engineering, biotechnology, pharmaceuticals, digital marketing, business and finance, and construction – but, speaking broadly, the jobs market continues on the up.

With uncertainties around the Brexit and the state of the world, it’s anyone’s bet as to how long this will last but, for now, graduates can breathe.

Tony Donohue is head of education and social policy at the Irish Business and Employers Confederation (Ibec). “CSO data shows that the unemployment rate for persons with an honours degree or above has fallen from 6.1 per cent at the start of 2014 to 3.3 per cent at the end of 2016,” he says.

“A third-level education is consistently associated with higher employment rates than for those who completed secondary education only. For example, over 85 per cent of graduates are in employment compared with 63 per cent of people with a Leaving Certificate. The graduate unemployment rate is less than half of the national rate.”

“The jobs market is good for graduates as well as for people who can understand and use the latest technology. If you think of the revolution in marketing and digital media, for instance, you’ll find that many graduates have these basic skills irrespective of their degree. The IT skills that graduates may have can even give them a headstart over more experienced professionals, meaning that they often move up the ladder quite quickly. They can play to their strengths: a senior professional may have less knowledge of the tone and language that drives online engagement.”

Mark Mitchell is director of gradireland.com and postgradireland.com, which produce careers publications and advice and also run career fairs. His knowledge of the graduate careers marketplace is second to none. “As is the case with the general jobs market, the outlook for graduates is strong,” he says. “There’s huge demand for fresh talent coming out of our third-level institutions and the employment prospects for graduates is buoyant. It’s a very different landscape to a few years ago.”

The competition for top graduate talent among employers is intense, says Mitchell. “This is reflected in the growing number of organisations, such as Workday or Three, starting up a graduate programme, or the big high street banks and the Public Appointments Service, re-starting programmes that have been discontinued.”

While there are jobs for graduates, it’s still the case they want the best talent, and the jobs marketplace is competitive. Employers could receive dozens of applications for a single job, so graduates need to make sure that they sell themselves well and have a strong CV and cover letter that highlights their skills and abilities.

What job to go for? It’s actually less of a big decision than it sounds because the companies that graduates start off their careers in are unlikely to be the ones they finish in.

“Think of a job these days and you’re likely to be at it for three to five years,” says Kennedy. “People are told to pursue their passion but, actually, I think this ‘passion hypothesis’ is a myth. Now, if you’re a writer or pianist and you have a plan and have been making money from it, great, but there’s an idea that everyone has a passion, that’s it there inside you or out in the world waiting to be found and that, if you don’t find it, you are lazy or you’re doing something wrong.

“Steve Jobs’s commencement speech spoke about how following your passion is the key to remarkable work, but he started off putting computer parts together and building on from there.”

If a graduate gets their foot in the door of a company, Kennedy says they need to ensure they make the most of the opportunity.

“Anyone who is willing to work hard to gain skills and do valuable work is key. Try to become indispensable to the organisation, so that if they are taken out of the mix, it becomes a real problem. Take on tasks that may not necessarily be your job and get to know the workings of the projects you’re tasked with. It’s when you move up that you may need to be more careful with your time.”

He advises graduates to develop depth to their careers.

“There’s a plague for the millennial generation: they’re 22, straight out of college, and they want to make a big impact. They wonder how they can make an impact in a graduate administration position. They need to use this time to develop their skills and experience beyond their qualification; it’s highly unlikely, for instance, that a journalist’s first ever piece of writing will be published in a national newspaper.”

Kennedy says that graduates can also use their jobs to facilitate other interests in their lives and in doing so may be avoiding financial or emotional stress. Interesting work can come about in unexpected ways, and graduates can find satisfaction and fulfilment in developing new skills. “This doesn’t usually come about through a course; it comes from doing remarkable work and gaining rare knowledge that employers are willing to pay you for, and becoming as indispensable as you can be to them. Whether you’re an architect, artist or cashier, if you do your work well, have pride in it and endeavour to help people, you can gain satisfaction from it.”

For more on career guidance and career coaching, see RonanKennedy.ie

Getting that job: advice from Mark Mitchell of gradireland.com

So the jobs are there, but how do you get them? And how does your degree relate to the jobs market of 2017?

Mark Mitchell, director of gradireland.com, says employers look for graduates who have layered a portfolio of employability skills on top of their academic achievements.

“Many graduate employers take the view that they can train graduates in the requirements of the job which, due to the fast pace of change in modern workplaces, change over time anyway. They see ‘discipline-specific knowledge’ as less important than key employability skills. Obviously, this is not applicable to every role: in science, engineering and IT you will need core discipline knowledge, but in other areas such as general business management, they’ll happily look to graduates from any subject discipline like arts and humanities as well as traditional business disciplines. This is because they are confident in their own training and development programmes.”

Mitchell says commercial acumen, teamwork, leadership, problem-solving and analytical skills are all hugely valued. But communication skills are most commonly cited by graduate employers as being the skill most lacking in modern graduates, so students who can build these skills during their studies have an edge when it comes to applications. How? “Volunteer for presentations in class; work on multi-discipline teams for projects; enter competitions; practise explaining complex technical processes to non-technical people in jargon-free ways. Practise on your friends and family if you have to.”

Gradireland. com">Gradireland.com has more advice on the jobs market and applying for the best roles.

Central Bank figures show that, of the 203,000 jobs created since early 2012, more than half have been taken up by candidates with a third-level qualification. Average graduate starting salaries have been increasing for the past two years, reflecting this growth in demand. According to the latest gradireland graduate salary and graduate recruitment trends salary, the average starting salary is now €28,461, with some sectors where there are known skills shortages – such as in IT development – starting in the mid-€30,000 range.

Tony Donohue of Ibec says people with higher qualifications are better placed to see increases in their earnings over time. “People with lower education levels, who usually have lower earnings at the start of their careers, tend to see a further decrease in their earnings with age. OECD data indicates that, on average, Irish adults with a master’s, doctoral or equivalent degree earn almost twice those with upper secondary education while those with a bachelor’s or equivalent degree earn 63 per cent more. This so-called “graduate premium” is more pronounced than in either the OECD or the EU as a whole.”