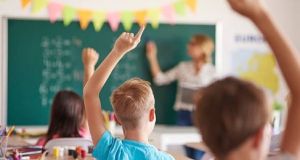 The new primary schools were announced in November 2015 to serve a number of locations under increased demographic pressure. File photograph: iStockPhoto

Educate Together has been award the patronage of two new primary schools in Dún Laoghaire and Dublin’s south city centre.

In all, the patronage of four new primary schools in Dublin and Cork was announced on Thursday, creating more than 1,700 primary school places.

The patronage of a new primary school in Pelletstown, north of Dublin’s Phoenix Park, has been awarded to Scoil Sinead, a new multi-denominational patron body.

This body says its aim is to “embrace the desire for diversity in education and is committed to the inclusion of all its students regardless of their abilities”.

Scoil Sinead is already working in partnership with the Dublin and Dún Laoghaire ETB in Griffeen Community College, a new post-primary school for Lucan to open this September.

It says the new primary school in Pelletsownwill be multi-denominational and co-educational.

In Cork, the patronage of a new primary school in Ballincollig, Cork has been awarded to An Foras Pátrúnachta, the largest patron body for gaelscoileanna.

Three of the schools are due open in September of this year, while the Educate Together school in south Dublin city is due to open next year.

The schools were announced in November 2015 to serve a number of locations under increased demographic pressure.

Minister for Education Richard Bruton said he had accepted the recommendations of an advisory group on patronage.

This followed a six-week process that ran over the Christmas and the New Year period, during which prospective patrons gathered evidence of parental preference as to what patron would run the new primary schools.

All applications were assessed on the basis of published criteria, including the extent of diversity in existing schools and the scale of diversity to be provided by the new schools.

“Parental preference has become a key determinant in deciding the patronage of new schools and I’m pleased to say that the views of parents as expressed through the process are strongly reflected in the decisions I have made on the patronage of these four new schools,” Mr Bruton said.

He said an “improvement” in the process to facilitate a separate parental preference for education through Irish had brought “greater visibility to consideration of the level of demonstrated demand for Irish-medium education”.

Educate Together said it was delighted to be awarded the patronage of two of the schools.

“We know of the huge demand for Educate Together from the enormous waiting lists in our existing schools in each area,” said the group’s chief executive, Paul Rowe.

“We hope that these schools will go some way to alleviating the pressure on both parents and existing Educate Together schools and extend the provision of equality-based education in Dublin.”

Accommodation for the two schools has not yet been announced by the Department of Education.

Educate Together says parents who signed an expression of interest form during the process will receive enrolment information in the coming week.

Separately, Educate Together says it has been confirmed as a chosen school patron in 16 areas identified under the current “reconfiguration” school transfer process.

The department has labelled these 16 areas as “early movers” under its recently published plan to reassign the patronage from religious schools in areas where there are few multidenominational options.

Educate Together says it is re-engaging with local start-up groups in each of these 16 areas.