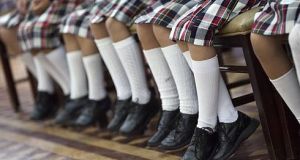 “Many of our students get by with two sets of uniform in five years. In many cases they can and are passed down through families. Not so with the generic brands you are promoting”

Plans to make schools cut the cost of uniforms and books for parents amount to “unaccepable micro-management,” the president of the country’s largest school management body has said.

However, Fr Paul Connell, president of the Joint Managerial Body and the Association of Management of Catholic Secondary Schools – which manages 400 schools – said the move was a “fig-leaf” for the underfunding of schools .

While schools have co-operated with the Department of Education through “thick and thin”, he said the latest proposal was “a bridge too far”.

“You will find no support for these measures as proposed in our schools,” Fr Connell told the annual conference of the Joint Managerial Body, attended by Mr Bruton.

“We will co-operate with any measure to genuinely cut costs for our parents but this particular proposal has been badly formulated and will, in fact, be counter-productive. Please rethink these proposals.”

He said the plans assumed that schools did not care for or listen to the views of parents. “The reality is quite the opposite. We couldn’t survive without our parents; they are already covering over 30 per cent of our costs. We have parents on our boards, we all have parents’ councils.

“We regularly communicate with our parents, often on a daily basis. Minister, if you want to reduce costs for parents, then fund our schools properly – don’t pretend that this initiative is anything but a fig leaf.”

He said parents polled by many schools have been overwhelmingly supportive of their existing school uniform policies which are provided by Irish suppliers and last longer than cheaper generic alternatives with sew-on crests.

“Many of our students get by with two sets of uniform in five years. In many cases they can and are passed down through families. Not so with the generic brands you are promoting.”

He also said book rental schemes were expensive to start-up, yet no additional money was available.

“Where are we to get €80,000 seed money for a school with 150 pupils in first year? Who will administer this scheme? We don’t have anywhere near enough posts as it is. And where does this leave ebooks?”

On admissions, Fr Connell said any attempt to remove the “Baptism barrier” from education would do nothing to improve access to schools.

At present over-subscribed schools may give preference to children in their admissions policies on the basis of their religion. However, Mr Bruton has announced plans to either limit or remove these measures in new legislation.

Fr Connell said the issue had attracted “huge attention and resources” despite affecting just 20 per cent of schools. “Changing the admissions procedures will not change the fact that some children, whatever way they are dealt with, will be unable to access the school of their choice due to a lack of places.

“The ‘Baptism ban’ is a nice sound bite much loved by lobby groups, but the reality on the ground is something different. The phrase cracking a nut with a sledgehammer comes to mind.”