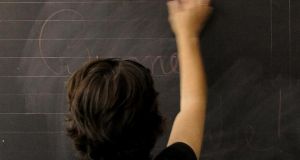 The Association of Trustees of Catholic Schools says proposals will seriously undermine the role of Catholic schools and their ability to continue to promote a “living faith environment”.

Should taxpayer-funded schools be permitted to give priority in their admission policies to children of their own religion ahead of other children who live closer to the school?

It’s a highly contentious question, given that more than 90 per cent of primary schools remain under the patronage of the Catholic Church or other religious organisations.

At the same time, more than a third of marriages are civil rather then religious and census figures indicate that about a fifth of families of parenting age describe themselves as non-religious.

Minister for Education Richard Bruton believes admissions rules are unfair and are putting some parents “under pressure to baptise their children in order to gain admission to their local school”.

Changes he plans to introduce by way of legislation this year will oblige Catholic primary schools to cease giving enrolment priority to baptised children in cases where they are over-subscribed.

The move will require a change to the Equal Status Act, which permits schools to discriminate on the basis of religion.

It now looks clear that Bruton will have a major fight on his hands in steering this legislation on to the stature books.

Submissions released to The Irish Times under the Freedom of Information Act reveal the depth of opposition from Catholic bishops and trustee bodies for thousands of Catholic schools, along with management bodies and missionary groups.

It also seems many of these groups are preparing to fight these issues in the courts, if required, and believe constitutional provisions, along with case law, give them good grounds to challenge any move which would discriminate against faith schools or parental choice.

Many also see this as a fight not just over admission rights, but over something much broader: a secularisation agenda aimed mainly at the Catholic Church.

Their arguments against the Baptism barrier proposals follow a similar pattern: most dispute the scale of the problem of children being turned away from schools on religious grounds.

The Association of Trustees of Catholic Schools, which represents the 64 trustee bodies in primary and secondary education, cites research in the Dublin diocese in which it is claimed that religion was a factor in just 1.2 per cent of school applications being refused.

Catholic schools also argue that they have a long tradition of welcoming children of all backgrounds to their schools.

Issues relating to children being turned away from oversubscribed schools, they argue, are due to a failure of the Department of Education to provide enough school places in growing population areas.

The Catholic Primary School Management Association, which provides advice and support for principals and boards of management in more than 2,800 schools, says the real issue is a “mismatch of resources rather than religion”.

“Legislating will not add a single school place to the system and will simply mean that people of faith will lose places in their first choice of school to people who in many cases would prefer to go to multidenominational school,” the association says, in its submission.

This is a point emphasised by the Catholic Schools Partnership, which represents the Catholic bishops in the education sector.

It insists the current admissions process is working “perfectly well with the vast majority of schools accepting all applicants”.

“. . . Forcing schools to change their admissions policies without increasing the number of places will only result in different families and their children being disappointed as a result of being unsuccessful in their applications for places in schools.”

It says the concentration of oversubscription in certain areas is mainly a result of the “failure on the part of the Department of Education to plan ahead and provide a for a broad diversity of school patronage in areas of population growth.

The Association of Trustees of Catholic Schools says the proposals will seriously undermine the role of Catholic schools and their ability to continue to promote a “living faith environment”.

It cites a series of High Court and Supreme judgments where it is clear “religious freedom and parental rights are paramount”.

This conflicts with Government plans to prohibit Catholic schools from using religion as a criteria of entry.

It said that any attempt to remove the capacity for a faith school to “give vitality to the characteristic spirit of the school” would lead to the “destruction of subsidiarity/community involvement”, breach internationally recognised rights to freedom of religion, flout domestic and international trust law and property rights, as well as parental constitutional rights.

“The option . . . is particularly disturbing to Catholic trustees and patrons as it directly affects the capacity of faith schools to organise themselves and free association in a modern, democratic pluralist society.”

“From a legal perspective, the current proposal, to a greater or lesser extent, impacts on the right of the board of management in a faith school to manage that school and provide a faith-based education to those of the faith community it was designed to serve,” it states.

Many Catholic groups also maintain that singling out denominational education is just one strand of a much more complex issue of how to maximise inclusion and diversity in schools.

They say much more research is needed to determine the scale of the issue and to examine wider issues such as access to schools for children with special needs, Travellers and other minority groups.

There is some criticism of other patron bodies – such as Educate Together and some gaelscoileanna – which are accused of taking pupils from “all over the city which encourages this idea of simply driving to your school of choice, which creates inflated demand in certain areas”.

The Association of Missionaries and Religious of Ireland says anxiety of admission to school is aggravated by the lack of a centralised applications process for schools.

“Neither parents nor schools actually know how many real pupils are enrolled until school term begins,” it states, adding “this situation is a source of much needless anxiety”.

It says the plans have the potential to adversely affect the rights of parents – as well as the autonomy of denominational schools. Both principles, it says, are protected in the Constitution.

“One could envisage a possible situation arising where a Catholic parent could not get a place in a Catholic school within reasonable proximity in which case, while not being obliged to attend a ‘State’ school, [they] might have great difficulty in exercising parental choice in accordance with their conscience and faith-based discernment,” its submission states.

Catholic bishops have also disputed whether religion is really a problem and noted that Catholics, too, can face obstacles accessing their local schools. “It is denominational education itself which is presented as the problem or cause of oversubscription, rather than a shortage of school places in particular areas,” the Irish Episcopal Conference’s council for education stated in a submission.