College abroad: learning to deal with the culture shock

For Irish students studying abroad, heavier workloads, less spoonfeeding and more independent learning can be a jolt to the system, but also a rewarding experience 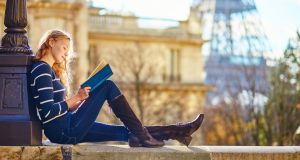 Rising numbers of Irish school-leavers are opting to study abroad in countries such as France, the Netherlands and Denmark. Photograph: iStock

The fees are cheaper. College accommodation is easier to get. Entry requirements are less demanding. Their universities rank higher than in Ireland.

It’s little wonder, then, that so many Irish school-leavers are opting to study abroad.

While achieving a degree from a European university is undoubtedly a great opportunity in fostering confidence and independence, many students are in for a shock.

Workloads are typically much heavier. There’s little or no spoonfeeding of lecture notes to students. There is no culture of teaching to the test. Instead, students are required to become independent learners and solve problems for themselves.

Coming from a Leaving Cert system dominated by “teaching to the test” and rote-learning, this can come as big jolt for many Irish school-leavers.

Guy Flouch of Eunicas, a Clare-based company which facilitates the transition to European universities, says while Irish students benefit from a high standard of teaching, the learning challenge can be daunting.

“The culture of independent learning or problem-based learning can be a bit of a shock to Irish students and takes a few weeks to get used to,” he says. “As can adjusting to a new culture and lifestyle and indeed a heavier workload. Some will miss the ‘craic’ as friends who stayed at home appear – through social media – to be having a great time.

“But this will become less important as time goes by and they forge ahead and start to enjoy new ways of living and thinking.”

More than 2,200 Irish students are currently studying in colleges across Europe.

Tom Finn from Sallins, Co Kildare, a second-year international business student at Maastricht University in the Netherlands, is one of them. He agrees that the first few months can be very difficult.

“I didn’t really know what to expect before heading to Maastricht,” he says. “I certainly didn’t think I would be so responsible for my own learning as students here run the tutorials themselves with presentations, reports and debates, while a tutor supervises, to ensure we stay on topic.

“This is a big change from secondary school, but it does give greater independence and responsibility to us, the students, which I have come to appreciate.

“Also, the workload was much bigger than I was expecting and it took some getting used to. And living away from home was tough. I still miss my family and the home cooking from time to time and I’d love to be able to bring my washing home on the weekends too. But it does get much easier after a while.”

The 19-year-old says the best way to settle into college life abroad is to make a big effort to socialise.

“Starting university is a very different experience, especially when it’s in a foreign country where most things are unfamiliar,” he says.

“I’d recommend getting out and meeting people as the first semester can be lonely if it’s your first time living away from home, so socialising and making new friends definitely helps to overcome this.

“Joining a sports team, club or association is a really easy way to meet people and helps to settle in quicker.

“Overall, studying abroad is a completely different experience and an opportunity to try something new, and I am actually really glad that I did it.”

Molly Fitzmaurice had a similar experience. Just graduated from Amsterdam University College with a Liberal Arts and Science degree, the 21-year-old experienced a lot of loneliness when she first arrived in the Dutch college.

But she says it didn’t take her long to make friends and she is now about to embark on a Master’s degree in Germany or the UK.

“In the beginning, the loneliness was the hardest part by far. I had very little common ground to make small talk with people, especially once I realised how culturally defined humour can be,” she says.

“However, this initial lack of connection changed over time and now I find myself capable of discussing small talk matters with almost anyone from anywhere.

“Leaving home always brings loneliness and longing for the safety of home, but when you move abroad you are lonely on both a personal and cultural level. I missed my family more than I realised and it hurt deeply to see my friends move on without me.

“But I also felt a strange loneliness in relation to my cultural identity. Along with my other international friends we always say that one of the perks of going home is the enjoyment of having easy banter with the cashier in the supermarket.

“A lecturer summed this up perfectly by saying ‘when you move abroad you are both alone and free’, and [FOR]those of us who crave the latter enough to override the former, living abroad can really be a life-enhancing experience.”

Don’t be afraid to ask for help and support, particularly from native friends, and book flights home as often as you need – this kept me sane

The Wexford woman says the workload was also harder than she imagined and both the system and grading much more challenging than in Ireland.

Despite this, she would encourage people to give it a chance and has advice for anyone who is contemplating taking the leap.

“It has been truly better than I imagined, with people interested in what I had to say and who I was, in a way I’ve never encountered at home.

“I would recommend moving abroad with a simple and clear reminder of yourself – carry on with a sport or hobby. I write a lot and whenever I feel overwhelmed I disappear for the day which always helped to calm me down.

“My advice would be to just let yourself go, don’t try to figure out things too early – so if someone says something that is completely different to a belief system you were raised with, try to understand it rather than outright reject it.

“Also, don’t be afraid to ask for help and support, particularly from native friends, and book flights home as often as you need – this kept me sane and made me feel like I was on holiday until I was ready for it to feel like my life.

“And whenever I felt inferior to those who didn’t need to regularly go home to see their mum, I remembered that I wasn’t born into an international setting, instead I was brave enough to figure out a way in which to obtain my own experience of one.”

Guy Flouch says while some students end up dropping out, those who are finding things difficult in the beginning should persevere and make the effort to fit in.

“The drop-out rate is low as usually students have put more time and effort into researching their programme and are certain it’s what they want to do,” he says.

“Also, students in UK and Irish universities are often disappointed by the challenges and workloads that are lower than they expected of ‘going to college’, and this is not the case of those who travel to study.

“But students also really enjoy themselves. However, I would urge them to remember that in return for their ‘right’ to an education, they are expected to take this right responsibly; play hard, if they want, but they must work hard too.”