More than 3,500 students secured exemption from Irish on the basis of learning disability 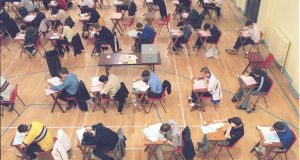 Official figures show that 60 per cent of Leaving Cert students who had an exemption from sitting the Irish exam went on to sit exams in French, German and Spanish. Photograph: Peter Thursfield

More than half of Leaving Cert students who were granted an exemption from studying Irish on the grounds of a learning disability went on to study a foreign language.

Irish is compulsory at primary and secondary level, though the Department of Education allows students to be excused on the grounds of disability or having lived outside the State for a period of time.

Official figures show that in 2015 a total of 3,592 students in their Leaving Cert year had an exemption to sit the Irish exam on the basis of a disability.

Of these students, some 60 per cent (2,168) went on to sit an exam for European languages such as French, German and Spanish.

The figures were obtained by The Irish Times from the Department of Education under the Freedom of Information Act.

The high numbers have prompted concern among some principals that students may be securing exemptions on the basis that Irish is regarded as one of the most difficult subjects.

The association has said that students with dyslexia need additional time and learning support in order to build their literacy skills in English, particularly at primary school.

Many of these students may go on to learn a second language later in school, it says.

Students must be assessed by a psychologist in order to prove they have a learning disability, such as dyslexia.

While the association has accepted that some individuals may try to “play” the system, it has said the criteria to get an Irish exemption on the grounds of dyslexia are very stringent.

In general, there has been a significant rise in the numbers of students securing exemptions at second-level to learn Irish for a range of reasons.

These grounds include pupils coming from abroad or students with a learning disability.

Its research acknowledged that evidence showed some of those exempt were studying other languages, but said the numbers were relatively small.

While most third-level students are required to have a pass grade in order to get into university, an exemption for Irish may also extend to National University of Ireland colleges, which include UCD, UCC, NUI Galway and NUI Maynooth.

Senior NUI figures have previously expressed concern that advantage could be given to a student who has a learning disability exemption but who is capable of learning a foreign language.

A succession of studies have shown that Irish is perceived by students to be among the most challenging of Leaving Cert subjects.