Educate Together school set to accommodation up to 600 pupils 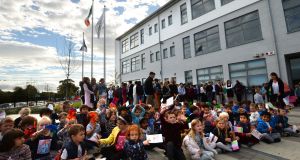 Seven years ago it was a flimsy prefab with a single teacher and seven students on the grounds of De La Salle Palmerstown rugby club.

But a gleaming new building for Stepaside Educate Together National School in Sandyford – set to be one of the State’s biggest primary schools – has now officially opened.

The €8 million building, which has 24 classrooms and a special-needs unit, will accommodate more than 600 pupils.

The primary school currently has some 200 pupils and is set to grow rapidly over the coming years, having taken in three streams of junior infants this year.

However, for the meantime it is sharing its premises with Stepaside Educate Together Secondary School, which is due to move to a permanent setting, with capacity for 1,000 pupils, over the coming years.

Anne Carroll, the primary school principal, recalled its early days in the foothills of the Dublin mountains. “It was a lovely start: it was a countryside location. We had deer visiting us in the yard every day. We were really happy there but we outgrew it very quickly. The good name of the school spread.”

As the school grew and moved to larger temporary premises, it became clear that a long-term facility would be needed.

“We started out with kindness and respect. And when we talked how we imagined our new school, we wanted it to be a place of high standards, of course, in teaching and learning, but kindness and respect were the most important things. And I think we’ve done that,” Ms Carroll said.

At an ceremony attended by Cabinet ministers Josepha Madigan and Shane Ross, Minister for Education Richard Bruton said he was delighted to officially open the new school.

“You can see from the spirit and enthusiasm here that this is much more than bricks and mortar – this is a fantastic school in a growing community,” the Minister said.

“To have this as a hub, accommodating the secondary school as well – it’s a model of what can be done. Thankfully, we’re in a position to be able make these investments now and plan for the future.”