Alarm among academics over impact of funding ‘crisis’ on third level 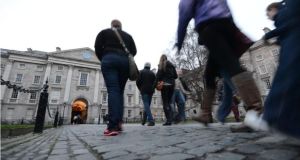 Overall, most Irish colleges either remained static or slipped further down the global league table.

UCC, however, bucked the trend, entering the top 350, as did Maynooth University which entered the top 400.

The general downward trend of Irish universities in global rankings has sparked alarm among senior academics over the funding “crisis” facing higher education.

They argue that Government-imposed caps on staffing, growing student numbers and a decade of under-investment are to blame.

In the meanwhile, Asian countries in particular are investing more in their universities and climbing up the rankings.

In a statement, the Department of Education said the Government has begun a significant programme of investment in higher education with €100 million more being spend compared to two years ago.

It also recently announced a €2 billion capital funding programme for the sector over the coming decade.

As recently as 2011, Trinity was ranked in 76th place. This year, despite improving in a number of sectors, it slipped again from 117th place to 120th due to mainly to increased competition.

The next highest ranked Irish institutions - UCD and the Royal College of Surgeons Ireland - both maintained their standing (201-250th place).

Ellie Bothwell, rankings editor for The Times Higher Education, said that while there were examples of progress from Ireland this year, the broader picture gave cause for concern.

“The country boasts immense potential for greater higher education success and visibility globally, and has a real opportunity ahead of it,” she said.

“Somewhat like Canada – as the US becomes more inward-looking – Ireland has an opportunity to reap the benefits of being open to the world, as Britain grapples with the potential impacts and restrictions of Brexit and tightened international student numbers.

“But to excel, its universities will require strong investment, the drive and ability to attract and retain the very best global talent, and a much-strengthened focus on research.”

Overall, the rankings show Oxford University in top spot for a third consecutive year, while Cambridge was second and Stanford in the US held steady in third.

Generally, while Europe and the US are still home to most of the top universities, east Asia is on the rise.

China’s new number one, Tsinghua University, overtook the London School of Economics and Political Science (LSE) and University of Edinburgh.

Irish universities: who’s up and who’s down