Well-prepared students ‘lucky and happy’ over paper with specific questions 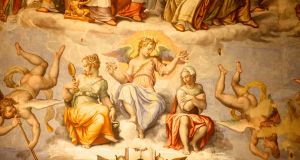 Students were broadly happy with Thursday’s Leaving Cert art history exam, which was described as wide-ranging with plenty of choice.

Just under 10,000 students sat the exam, which accounts for less than 40 per cent of their final marks, having completed a practical exam earlier in the school year.

“The Irish section included the Stone Age, which students liked. Louis Le Brocquy appeared on the paper for the second year in a row.

“The European section had a nice comparison between Romanesque and Gothic sculpture. The gallery question in the appreciation section was straightforward and would have been popular.”

Angela Mary Griffith, art teacher at the Institute of Education, said well-prepared student would feel lucky and happy with a paper that contained specific and focused questions.

Students who took a broader approach may have had fewer opportunities to demonstrate their breadth of knowledge, she said.

Mr Lane said the ordinary level paper was relatively easy, with questions on the artist John Behan and Newgrange.

TUI teachers also said the questions were wide-ranging, so students had plenty of choice, while reasonably prepared students should have found it within their capabilities.

The Irish section should have suited students as Stone Age tombs came up in question one.

There was lots of choice on Irish Christian metalwork in question three, with students being asked for two examples.

“In general, straightforward questions and a broad range of topics,” the teachers said in a statement.

In the appreciation section, they said, a straightforward gallery, museum or interpretive centre question allowed students to display their knowledge.

“The question also demanded the students to describe and discuss how to display artefacts - an unusual twist that had not been seen for a while, but students should be well able to answer this and apply what they know about exhibitions to the varied artefacts on the list,” the statement said.

It said the ordinary level art had a straightforward section on Irish art. Students should have known the areas well enough to answer them confidently.

In the European section, it said there was a good spread of periods, with popular choices such as Leonardo Da Vinci, Renoir and Picasso.

“Illustrations [were] given to many questions which aids the description for candidates at this level,” it said.

The general appreciation section, meanwhile, had straightforward questions without any surprises, while the gallery question was “fair” and should have been easily answered by candidates.