Students at Coláiste Éinde in Salthill, Galway, to share exam highs and lows for ‘The Irish Times’ 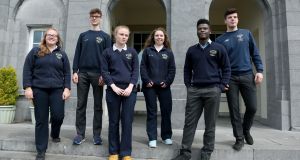 There’s a line forming outside the principal’s office. They’re waiting patiently, but they’re not here to talk to Deirbhle Quinn, the school principal.

She’s not just the gatekeeper – she is the person who knows every child at this school.

“She knows something about them all,” says Quinn. “She might be asking a student why they’re late, but she might also be quietly giving them €2 for their lunch. The kids and the parents all know her, and the appreciation for her work is clear at the end of each school year when her desk is full of gifts. Indeed, the commitment and dedication of all the staff to curricular and extracurricular activities make the school what it is.”

I’m in the principal’s office in Coláiste Éinde, a co-education school of 760 pupils and 61 staff just a stone’s throw from the promenade and right next door to the all-girls school, Salerno.

Final preparations are under way for State exams. Six students here will be Irish Times exam diarists for the duration of the Leaving Cert, charting their highs and lows over the coming weeks.

They have a wide array of hopes for life after the exams, but are united in their aspiration to fulfil their potential and, in the process, make a difference in the world.

They are growing up in an area which, like much of the rest of the country, has seen dramatic changes in recent years. The population locally is climbing and the school, once white and monocultural, is now home to 46 nationalities.

There’s a waiting list to get into the school but Quinn is hopeful that more classrooms can be added in coming years. The Coláiste Éinde that was founded in 1928 is virtually unrecognisable today.

Originally situated in Furbo, Connemara, it was a Gaeltacht boarding school for boys from farming and fishing backgrounds, with an emphasis on preparing them to train as primary school teachers in St Pat’s, Drumcondra.

It is now in Salthill and has Deis, or disadvantaged, status. It has been co-educational since 1992; the boarders are long gone and it is now a school for students from all walks of life preparing to go on many different paths.

Famous alumni include Republic of Ireland soccer player Daryl Horgan, who may be followed by Evan Murphy, one of this year’s diarists and a member of the Ireland under-18s squad.

English teacher Gerry Hanberry has had several poems published in this newspaper. The school has done well in the BT Young Scientist competition as well as girl’s basketball, and a new philosophy society has proven wildly popular with the students.

“The school is a voluntary secondary under the patronage of the diocese of Galway, but a growing number of our students – at least a quarter – are not Catholic,” says Quinn.

“They are facilitated in opting out and they are given reading material, often on philosophy or personal development, during religion class time. They have the option of supervised study in the library for whole-school liturgical services, although many non-Catholic students do choose to attend them anyway.”

There are 22 subjects on offer at the school for Leaving Cert, including the Leaving Cert vocational programme, which about two-thirds of the students take up.

“They find it gives them a very good insight into the world of work, because it involves portfolios and CVs,” says Quinn. Each year group has a pastoral care team that meets on a weekly basis to identify any problems the students may have and how best to respond to them. “Happy children will learn. We encourage parents and students to talk to us. But I worry that, outside school, there is not enough State support for youth mental health.

“Social media has made children less resilient and we really need to address this now. I’m also glad to see the beginning of a new national apprenticeship system,” she says. “The Leaving Cert isn’t for everybody and we need to give every child a meaningful opportunity in life.”

Osas Aghabue-Ayo Osas (17) the eldest of four siblings, isn’t completely sure what he wants to do in college, though he is leaning towards engineering. He likes playing Gaelic football and listening to music, particularly J-Crew.

Osas is not big into social media but occasionally uses Snapchat. He’s not prone to worry, but says he doesn’t want a boring life. Indeed, the desire to have meaningful and different work and exciting life experiences was a common theme among this year’s diarists.

Lauren Conway Lauren (18) is interested in art, poetry and literature. She has a twin sister who attends Salerno, the school next door; they each wanted something different from school, she says.

She would like to be an artist, writer or journalist, and hopes to study either fine art in IADT or English in Trinity College. Her favourite subject is history and her least favourite is maths. When studying, she tries to find a connection with the material and to see how it relates to real life, but admits it can be hard to do this with, for instance, calculus.

Tom Crumlish Tom (18) the eldest of three, has his sights set on being an entrepreneur. He wants to study global commerce at NUI Galway. His interests include Gaelic football, piano, economics and business, and he enjoys watching sports too.

He is going to a music festival in Budapest this summer and will return the day before his results. To relax, he goes to the gym and watches Netflix; Peaky Blinders is his favourite show. His biggest fear is looking back on his life and feeling he has failed. He says there is not enough support for indigenous Irish firms and that we are too reliant on multinationals.

Ciara Kibane The youngest of four, Ciara (18) initially considered becoming a home economics teacher but now wants to be an entrepreneur in the food industry. She is hoping to get into food science or culinary and gastronomic science at GMIT.

Her hobbies include make-up – she taught herself through YouTube tutorials – and playing Gaelic football. She relaxes by watching Prison Break or Pretty Little Liars, and going for walks while listening to music. She is excited by the new opportunities that await her in college and the chance to travel the world afterwards.

Muireann O’Reilly The other diarists treat Muireann (17) like she is the brightest person in the room, although there’s clearly some competition for the title.

Muireann hopes to study biomedical science at NUIG; incidentally, there are good job opportunities for graduates of this course in the west of Ireland. She wants to make a difference in the world and believes this can be achieved through science.

She’s almost fluent in German, but biology and chemistry are her favourite subjects. Music, hurling and camogie are her passions, and she’s excited by the current success of the Galway hurlers.

Evan Murphy Evan (18) plays for the under-18 Republic of Ireland soccer squad and for Galway United; he also plays GAA for the Galway minors. He hopes to play soccer for the main Irish men’s squad and has applied to study physiotherapy at UCD. His favourite subject is accounting and his least favourite is Spanish.

He has a big match for the Galway Minors five days afterwards and so will have a more muted celebration of his results than most of his classmates. To relax, he plays sport, listens to music, walks the dog and watches Netflix.