Leaving Cert: ‘The harder I study the more seizures I get’

About one in seven students, or 17,000, will require exam support over the coming weeks

Leaving and Junior Cert students at Mount Temple Comprehensive School in Clontarf, Dublin talk about their first day of exams. 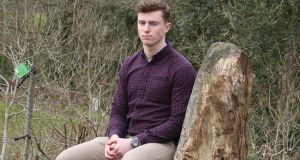 Glenstal Abbey student Sean Fenton(18) from Cork city who suffers from epilepsy: he is repeating his Leaving Cert after suffering a seizure during his history Leaving Cert exam last year. Photograph: Liam Burke/Press

The Leaving Certificate exams are stressful for all students, but particularly for students with medical conditions or learning difficulties.

About one in seven students, 17,000 each year, require some form of exam support, waiver, or accommodation during the State exams.

Sean Fenton (19) is one student with epilepsy sitting the Leaving Cert exams this month. Fenton goes to school at Glenstal Abbey, Limerick.

He says students with epilepsy, a condition which is made worse under stress, are at a disadvantage sitting the exams.

“In terms of epilepsy, the harder I study, the more seizures I get,” he said. “Everyone knows the exams are a memory test, but that doesn’t suit some students.”

Fenton experienced an epileptic seizure during last year’s history exam, and as a result is repeating the Leaving Cert this year.

His mother, Nuala Fenton, says improvements have been made to allow students like her son to take rest breaks during exams.

“But what is really needed is more spacing out of the exams, or the option to repeat an exam in the event of a seizure happening,” she said.

Michaela Murphy (19) from Foxford, Sligo, is another student with epilepsy who sat her Leaving Certificate two years ago.

Recalling her experience she said: “I missed a lot of school in sixth year, being in an out of hospital with seizures.”

“If you have a seizure the day of an exam, or during an exam, it’s over. You completely lose where you are, or what you are doing,” Murphy said.

“If you miss an exam, there’s nothing you can do except repeat the Leaving Cert next year. There’s just no understanding for students with conditions like epilepsy, it’s not fair,” she said.

The number of applicants granted “reasonable accommodation” this year has dropped to 16,760 students, compared to 17,550 in 2016. The SEC has said the 2017 figures do not yet include emergency applications that may occur over the exam period.

The reasonable accommodation scheme can include grammar or spelling waivers, the use of a scribe, reading assistance, or the option for students to sit their exams in a separate smaller centre to a school’s main exam hall. Some students can also apply for an extra 30 minutes to complete their exams.

In 2016, a total of 2,292 students were granted a subject exemption, mainly in language subjects like Irish if they were new to the country. Subject exemptions are commonly granted to students with dyslexia, or who have moved to Ireland from abroad.

About 7,200 students are given a spelling or grammar waiver for the exams each year, and over 6,000 students avail of reading assistance supports.

While the incidence of special or individual needs is broadly on the rise, reforms of the reasonable accommodation scheme – aimed at giving schools more decision-making power to grant exam supports – have resulted in slightly fewer students being given special assistance for this year’s exams.

The Dyslexia Association of Ireland (DAI) said teachers and students have “expressed concern at the inconsistency and misinformation around the scheme this year”.

A spokeswoman for the DAI said they have been contacted by a large number of teachers who “are unsure of the new process around testing for reasonable accommodation”.

The commission says that under the reformed process “there is greater access to the scheme”, as students are no longer required to be diagnosed with a specific learning difficulty to be eligible for exam support.

The number of applications for reasonable accommodation refused by the SEC has dropped from 7,950 in 2016, to 5,700 for this year’s exams.