You're hired: how to become an apprentice 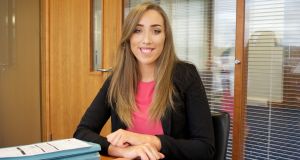 Aisling Devitt, from Celbridge, Co Kildare, is part of the first group of students enrolled in a batch of new financial services apprenticeships. Photograph: Jack Power

For students sitting their Leaving Cert this month, the exams can feel like the most important weeks of their lives.

The intense focus on securing as many CAO points as possible means many see college as their only option.

A major revamp of the apprenticeship scheme , however, is providing students with a new alternative to third level.

Aisling Devitt (21) has just finished her first year in an apprenticeship in insurance.

Aisling, from Celbridge, Co Kildare, is part of the first group of students enrolled in a batch of new financial services apprenticeships.

“I stressed so much about my Leaving Cert when I was doing it - but now I realise that I shouldn’t have. You’ve so many other options. College doesn’t suit everybody,” she said.  The Department of Education, which hopes to double the number of students taking up apprenticeships in the next four years, is expanding the range of industries offering apprenticeships into areas like software development, financial services and accountancy.

Apprenticeship schemes last between two or three years in most cases, and students learn through working full time in the given business or trade, earning a wage and finishing with a qualification in the field.

“I definitely think that in this day and age it is really important to have some sort of qualification to stand to you,” said Aisling. “But I think there is so many ways of getting your qualifications other than college.”

After school, she started a marketing degree at Dublin Institute of Technology (DIT), but took a gap year after her first year to work.

Instead of returning to college, she applied for a new insurance apprenticeship scheme and was hired on a three-year apprenticeship by the Robertson and Low Insurance firm.

The apprenticeship sees her work four days a week in the firm’s office, and she takes online classes at work one day a week.

At the end of the three years she will finish with her insurance industry qualifications and a level eight degree.

This year some 3,800 people started apprenticeships, mainly in traditional trades such as engineering, carpentry and construction.

Solas, the State agency which manages the national apprenticeship scheme, hopes to increase the annual intake of apprentices to over 5,000 in the next three years.

There are a host of other alternatives to third-level as well, such as Post-Leaving Cert courses and other “earn and learn” routes into employment.

A new enhanced skills programme developed by Speedpak Ltd, a north Dublin-based social enterprise, is one of them. It delivers targeted education and training to people from disadvantaged backgrounds.

It works with local education providers such as DCU and Coláiste Dhúlaigh, as well as local businesses, to deliver both academic and industry-relevant courses.

Nikki Gallagher, communications director at Solas, said a key problem for students finishing their Leaving Cert is a lack of awareness about the alternatives to third level education.

“What we’re trying to do is make sure young people know that there is a whole range of options, from higher education to apprenticeships,” Ms Gallagher said.

There are many benefits to taking up a job in an apprenticeship scheme, she said: you get to earn a wage while working towards a qualification, and the craft or technical skills you learn are very transferable if you move abroad.

“What we are saying to Leaving Cert students is, if you’re not sure of your plans, have a look at what’s available,” she added.