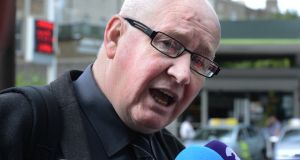 ASTI president Ed Byrne has said the union will now ‘move inside the tent’ of the Lansdowne Road pay deal. Photograph: Cyril Byrne

Thousands of secondary school teachers who are members of the Association of Secondary Teachers Ireland (ASTI) will receive thousands of euro in pay increases after the union voted to suspend its long-running campaign of industrial action.

Key leadership figures in the union, meanwhile, have faced calls from some members to “consider their position” after delegates at a special convention voted to reverse the union’s strategy.

Noel Buckley, a member of the union’s central executive who helped lead a grass-roots revolt against the leadership, said the current strategy had only served to hurt members and deny young teachers access to permanent contracts.

The decision to suspend the union’s current campaign of industrial action was taken by 240 votes to 121 at a special ASTI convention held in Dublin on Saturday.

This means many of the union’s 17,000 members are now set to receive a number of payments that had been frozen due their opposition to the Lansdowne Road agreement. They include:

– An immediate lifting of salary increments – worth up to €2,000, depending on where individuals are on the pay scale – which have been frozen since last year;

– A payment of €796 for supervision and substitution cover;

– A €1,000 pay increase, which was provided to other public-sector unions earlier this year;

– Pay increases for new members that will total 15-21 per cent over the coming years;

The Department of Education has pledged to provide these payments with “immediate effect”. However, teachers will not receive retrospective payment for salary increments they missed out on.

In suspending the industrial action, ASTI members will now co-operate with junior cycle reforms and the requirement to work 33 additional “Croke Park” hours a year.

A separate ballot on the new draft public service pay deal, which was agreed last week, is due to be held in the autumn.

The department has warned that penalties could be re-imposed if the ASTI recommences industrial action in the future.

ASTI president Ed Byrne – who opposed calls to suspend industrial action – said the union will now “move inside the tent” of the Lansdowne Road pay deal until there is a ballot on the new draft deal in the autumn.

Mr Byrne said support for the leadership’s campaign started with widespread support, but this slipped away as the Government took more punitive action against members .

He said at a ballot in January there was almost a 50-50 divide. “Therefore it had been slightly divisive, but hopefully nothing that is lasting,” Mr Byrne said.

The motion to suspend industrial action came about on foot of a campaign by teachers who were becoming increasingly concerned over union losses.

Some 1,216 members have resigned from the ASTI since the beginning of this year.

Mr Buckley said Saturday’s vote was significant in that ordinary members had decided to “take back control” of the union.