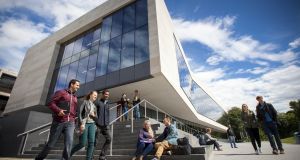 While exams will be marked anonymously, name will continue to be used for any form of assessment other than the formal written exam. Photograph: Patrick Henehan

NUI Galway will no longer require students to put their names on exam papers amid concern over marking bias.

The college’s academic council has approved a proposal to introduce anonymous marking which will commence in the new academic year.

The move follows a year-long campaign by the university’s students’ union which was concerned at the potential for candidates being marked unfairly on the basis of gender, ethnicity or religion.

On foot of the change, students will only be identified in their exams by their student ID number from now on.

Most Irish universities have had anonymous marking for many years, although some institutes of technology still require students to include their names.

NUI Galway students’ union vice president and education officer Cathal Sherlock said the move would give students greater confidence over the integrity of the marking process.

“Thousands of students have just completed their Leaving and Junior Cert exams anonymously, while students at NUI Galway are still writing their names on their exams,” he said.

“I am delighted with the successful outcome of our year-long campaign to introduce anonymous marking for NUI Galway students. Anonymous marking will remove the potential for any bias or unfair favouritism.”

Mr Sherlock said the campaign was sparked by a staff member involved in the examination process who was concerned about the potential for bias.

“There is also research on discrimination showing, for example, that men who study nursing can do worse than women,” Mr Sherlock said.

“Anonymous marking was pledged by the university 13 years ago, but was never followed through. External also examiners raised it in a quality report in 2015.”

The new policy states that while exams will be marked anonymously, names will continue to be used for continuous assessment, course work, laboratory practicals or any form of assessment other than the formal written exam.

While students’ numbers will only be visible on exam papers, they will include have a flap where may students write their names.

These flaps may only be opened only where there are issues with identifying the student.

“I share in the enthusiasm for the adoption of anonymous marking and acknowledge the drive and support from the students’ union for this initiative,” she said.

“I am pleased also by the support of colleagues on academic council and that of academic staff in adopting the new policy.”