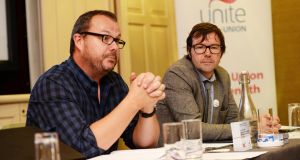 Minister for Education Richard Bruton has been urged to regulate employment standards for English-language teachers at privately run language schools, amid claims they are often working in precarious conditions and on zero-hour contracts.

The trade union Unite, which organises English-language teachers, briefed members of the Oireachtas on Tuesday on the issues facing teachers in the sector.

Organisers urged the Oireachtas Committee on Education and Skills to hold a hearing on the forthcoming Qualifications and Quality Assurance (Amendment) Bill. They said workplace standards for teachers should be included in that legislation.

There are about 120 schools throughout the State, with about 20 of those in Dublin. Teacher numbers vary seasonally between 1,300 and 2,000, and Unite has about 100 members.

English-language teachers told the briefing they sometimes lacked basic facilities such as proper desks, whiteboards and even enough toilets in buildings with 200 or 300 students.

More than a dozen language schools closed in 2014 and 2015 after a series of scandals and a clampdown on what the Department of Justice had described as “visa factories”.

In late 2014 the then government announced a package of reforms, including the creation of a new interim register of accredited courses and an enhanced inspection regime.

But Unite regional organiser Roy Hassey claimed precarious conditions were “rife” and that some teachers were earning as little as €13 an hour. The sector was “booming on the backs of workers”, he said. Of forty teachers he recently met who were working for the same school, every one of them was on a zero-hours contract.

Keith Murdiff, from Dublin, said the union wanted the Department of Education to discuss with it the International Education Mark, which will shortly be introduced to replace the current regulatory system.

The union wanted minimum requirements for teachers’ contracts and employment to be included in that system.

“The relationship between teachers and private providers of education is based on a private contract, and issues relating to working conditions are a matter between the two parties and do not come under the remit of my department,” he said.

“If teachers working in the English-language sector have a concern about their terms and conditions of employment, they should contact the Workplace Relations Commission, which offers a range of services to employees, including mediation, adjudication and inspection.”

Mr Bruton said it was the intention that the regulations governing the International Education Mark would include a requirement on providers to comply with national employment legislation.

Asked for a response to the claims made by Unite, David O’Grady, chief executive of Marketing English in Ireland said: “MEI, as the association of 66 regulated English-language schools nationwide, engages regularly with government departments, government agencies and Oireachtas members on matters concerning the [English-language teaching] industry and will continue to do so.”