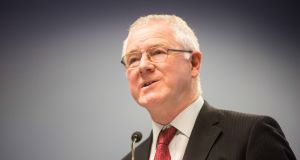 Cork Institute of Technology is to appoint its registrar, Dr Barry O’Connor, as its interim president.

He will succeed Dr Brendan Murphy, who is due to retire at the end of August having served as president since 2004.

A process to recruit a replacement earlier this year did not result in a permanent appointment, after a selection board decided not to make a recommendation to the college’s governing body.

CIT’s governing body formally ratified Dr O’Connor’s appointment on Friday and he will take over from September.

In an interview, Dr O’Connor said he hoped to sustain the current work of the institute as well as continuing the college’s advance towards securing technological university status.

CIT, which has about 14,000 full- and -part-time students, is seeking to merge with IT Tralee to form a new technological university for the Munster region.

He said a major challenge was securing enough funding for the sector and called on the Government to consider extra support from specific departments for key sectors.

“We don’t need to reinvent the wheel. It’s problematic that everything goes through the Department of Education, which has a huge domain to look after,” he said.

This, he said, was a model which could be examined by policymakers in Ireland.

Dr O’Connor joined CIT more than a decade ago as head of school of mechanical and process engineering.

He noted that institute – which produces more engineers annually that any other third-level college – suffered from a funding system that does not recognise the additional expense of funding science and engineering programmes. CIT is carrying a deficit of about €1 million.

Separately, Unesco, the UN’s educational organisation, has announced that it will host a major international conference on “learning cities” in Cork next September.

More than 650 participants from over 95 Unesco member countries will attend the conference at Cork City Hall.

The biannual international conference will focus on the theme of lifelong learning.

Conference delegates will include mayors, city education executives and Unesco experts, along with international organisations, non-government organisations and private-sector partners who are experts in the field of lifelong learning.