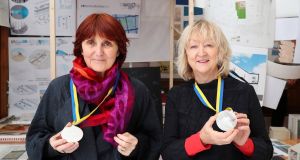 Yvonne Farrell and Shelley McNamara, founders, of Grafton Architects were recognised for their outstanding global contribution at an event at the university on Friday afternoon. Photograph: Marc O’Sullivan

Yvonne Farrell and Shelley McNamara, founders, of Grafton Architects were recognised for their outstanding global contribution at an event at the university on Friday afternoon.

It has been a busy year for the pair who curated the 16th Venice Architecture Biennale.

They were also awarded the Royal Institute of the Architects of Ireland (RIAI) gold medal for architecture 2007-2009 for its design of Bocconi University in Milan, Italy.

The RIAI gold medal is Ireland’s top accolade for architecture. The project must be completed within a defined three-year period and the medal is awarded several years after completion so that the success of the building can be confirmed by the passage of time.