C&AG report finds benefits received by executives has been valued at over €1.2 million 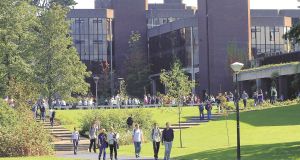 A Comptroller and Auditor General report says the University of Limerick added executives to State-funded pension scheme at cost of €1.2m.

Two executives at a University of Limerick subsidiary company were added to the university’s State-funded pension scheme at a cost of more than €1.2 million even though they were not university employees.

The finding is contained in a report by the Comptroller and Auditor General into the handling of remuneration for certain senior staff at UL and Institute of Technology Sligo.

The report states UL’s defined benefit pension scheme was about to close to new entrants in late 2012.

However, the two executives employed by a subdidiary company - Plassey Campus Centre, which supported developed of the university - were added to the scheme just weeks before it closed.

While the explanation provided by the university was the two executives had been promised pension benefits equivalent to employees recruited to the college, there was no documentation to support this.

The additional pension benefits received by the two executives has been valued actuarially at over €1.2 million.

The report also examined two severance deals at UL in 2012 which have been the subject of a previous report by the C&AG.

It found the university “misrepresented the circumstances around the severance deals” by failing to disclose that it had entered into three-year consultancy contracts with both managers at the same time as the severance deals were agreed.

The combined severance/consultancy arrangement put in place resulted in estimated additional costs to the UL of €310,000.

The report also finds that Institute of Technology Sligo paid a €200,000 severance package to a former employee, which was five times greater than the sanction provided by the Department of Education.

It found about €100,000 was incorrectly classified as payment related to “sabbatical leave”.

IT Sligo’s attempts to categorise it as such “fall short of the levels of transparency expected of public bodies”.

These provisions are designed to compensate for the inability of certain professional or technical staff to qualify for a full pension based on 40 years service by mandatory retirement age.

Up to late April 2018, DCU and UL operated their own separate frameworks for the award of professional added years.

An analysis of awards in these two universities between 2012 and 2016 found that UL awarded its employees more generously than DCU.

UL awarded a total of 324 added years between 2012 and 2016 which cost the exchequer an actuarially estimated €1.27 million by increasing the amount of lump sums paid out to retirees upon their retirement.

In addition, there will be an associated ongoing annual cost to the exchequer estimated at €400,000 per year, in paying increased annual pensions to those retirees.

The sucess rate for these applications at UL was 89 per cent.

DCU, by contast, awarded a total of about 90 added years over the same time-frame.

The success rate of applications in Dublin City University for the same period was 52 per cent.

The Higher Education Authority has since written to both universities to say all applications for professional added years awards will now be approved by the Department of Education from now on.