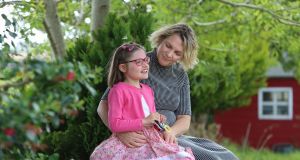 Angelina Hynes with her daughter Zoe (9) at their home in Galway. Photograph: Joe O’Shaughnessy

Angelina Hynes felt a wave of relief when she heard confirmation that the Government is planning to keep special schools open for children.

“I’m beyond words. We’re ecstatic. It means we won’t have to firefight this time. Special needs children need to be a priority,” she said.

Her daughter Zoe (9) is still trying to regain vital skills she lost during the lockdown last year which shut all schools for several months.

She is diagnosed with a rare genetic disorder and is intellectually disabled, non-verbal and incontinent.

Zoe attends Rosedale Special School in Co Galway, where there is access to trained tutors, occupational therapy, speech and language therapy, psychological services and technology which helps her to communicate with her eyes.

“It took years for Zoe to develop the ability to feed herself with a spoon,” Ms Hynes said.

“She had to learn how to hold a spoon for a few seconds, then to move it to her mouth, then to put food on it; then to move that spoon to her mouth again. Month after month of repetitive work, day in day out,with dedicated support . . . When the schools closed last year, she lost it all within weeks.”

Following a Government decision, special schools and special classes will reopen fully for about 18,000 children from next Monday.

Other schools will close for the month of January at least, with the exception of sixth-year students, who will attend school three days a week.

Minister of State for Special Education Josepha Madigan said the decision was made in light of the impact that previous school closures had on vulnerable students.

“It is for this reason that I have sought to maintain specific provision for special education at this time, including ensuring that special schools and special classes can remain open,” she said.

“It is clear that a one-size-fits-all approach to education provision during this pandemic will not benefit every student. I do not want to see the educational progress of students in special schools and special classes negatively impacted at this time.”

Unions representing school staff, however, have expressed grave concerns over the health and safety of their members and students.

Groups representing children with disabilities – Down Syndrome Ireland, Inclusion Ireland and AsIAm – welcomed the decision but warned that more than 10,000 students with special educational needs in mainstream classes will not benefit from the measures announced.

Ms Hynes, meanwhile, says Zoe is still trying to regain the ability to feed herself.

She estimates Zoe regressed by about one year – but with the assistance of the school, she is making slow but steady progress.

“When the school bus comes in the morning she is delighted. It gives her a sense of independence and freedom.

“She feels like she’s a big girl. She loves that there are other children there and has become a bit of a social butterfly.”