A-level and GCSE exams cancelled for 2021 in Northern Ireland

A further 13 deaths and 1,985 additional coronavirus infections registered in North 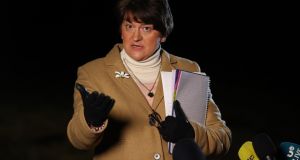 First Minister Arlene Foster said: “We’re asking everyone to stay at home unless there are good reasons for leaving your home ... there will be police powers to direct you home if you’re not following the regulations”. Photograph: Liam McBurney/PA Wire

All A-level and GCSE exams will not go ahead this year, the North’s minister for Education Peter Weir confirmed on Wednesday as Northern Ireland faced into a more restricted period of lockdown.

Mr Weir told Assembly members that due to the prevailing Covid-19 situation that the three main second-level exams – GCSE, AS and A-level exams – will not take place in 2021.

The exams – the equivalent of the Leaving and Junior Certificate tests – were due to be held in January, February, May and June with some GCSE tests scheduled for this week.

The DUP minister announced his decision on a day when the North’s department of health reported 13 more Covid-19 deaths and 1,985 additional infections.

The death toll in Northern Ireland is now 1,397 while there are 83,236 positive cases since the outbreak of the pandemic and 12,144 in the past week.

Hospital bed occupancy is now at 102 per cent. There are 592 patients receiving coronavirus treatment in Northern Ireland hospitals with 44 in intensive care and 37 on ventilators.

On Tuesday night Mr Weir said that most schooling will be done remotely with the majority of pupils learning from home until the mid-term break in mid-February.

In the context of such virtual learning it would not be feasible to hold the exams, the Minister told Assembly members on Wednesday. “With a further six weeks of remote learning having to be imposed we cannot continue with the exams in the way that was planned,” said Mr Weir.

“Work will continue on the alternative awarding arrangements and further details will be brought forward as soon as possible,” he added.

A strict six-week lockdown was introduced in Northern Ireland on St Stephen’s Day in an attempt to halt the spiralling number of cases. And further measures have come into effect, including a legally enforceable instruction to stay at home for all but essential purposes.

The PSNI’s representative body, the Police Federation, said there would be difficulties legally enforcing the new “stay at home” regulations that apply from Friday.

The North’s Minister of Justice Naomi Long told Assembly members that breaches of the regulations could lead to a £200 fine and one up to £5,000 if cases go to court.

The exceptions to the stay-at-home rule are for travel to work, medical appointments, shopping and exercise.

Ms Long said the Executive also was advising that people should not travel further than 10 miles for exercise.

Minister for health Robin Swann told MLAs that about 50,000 people have received a first jab of the vaccines deployed in the North.

Chief medical adviser Prof Ian Young, in briefing the Assembly health committee on Wednesday, hoped the impact of restrictions in place since December 26th would be seen from the end of this week “in terms of a reduction in R [the reproduction rate]”, which is at 1.8 and in case numbers.

“Unfortunately it’s likely hospital admissions and numbers of patients requiring hospital treatment will continue to rise and that the inpatient numbers will not peak until sometime in the last two weeks of January,” he added.

Prof Young said any impact of the new, more virulent strain of the virus that has become dominant in the south of England is likely to be “relatively small”. The expert view was the “current numbers can be explained simply by the increased contact patterns and mixing before Christmas”.

The first doses of the second type of vaccine available in the North, the OxfordAstraZeneca medication, were administered earlier this week.

Deputy First Minister Michelle O’Neill said the escalation in case numbers “presents a real threat to our health service”. And she added that it is “not possible to protect the NHS and save lives without further significant restrictions”.