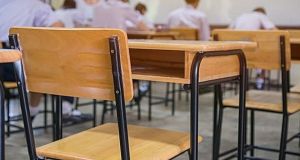 All schools will close for three weeks from Monday. File photograph: PA

Q: We are at Level 5. Why is there a need for more restrictions?

A: The dramatic escalation of the outbreak has forced the Government to take further drastic action in an attempt to curb the spread of the virus. With daily numbers rising from the low hundreds in early December to thousands in early January and peaking at 6,000 on Sunday – and with hospital admissions increasing alarmingly – something needed to be done.

Q: So what are the main changes?

A: The closure of schools for the month of January is the biggest change. Even when most other activity was being shut down in the face of rising numbers, the Government was determined to keep schools open. Last week it delayed reopening schools by three days until next Monday, January 11th. But at the Cabinet meeting Ministers accepted that the new data made the case for schools closure inarguable. Taoiseach Micheál Martin accepted it was a reluctant decision because “education is the great equaliser”. But he said keeping education open involved “one million people on the move” daily.

So all schools will close for three weeks from Monday with a review at the end of January. There are exceptions. Leaving Certificate students will be allowed to attend school for three days a week, with remote learning on the other two days. In addition, there will be arrangements put in place to allow children with special needs attend classes.

For all other primary and secondary students, the month of January will involve home schooling and remote learning.

Q: Will the Leaving Certificate be cancelled?

A: The answer to that at this moment in time is no. The fact that Leaving Certificate students are being allowed to attend school for three days a week signals an intention by Government that it wants the exams to proceed this year. This puts the State policy at variance with that in Northern Ireland where its Minister of Education Peter Weir announced earlier on Wednesday that neither A-level exams (equivalent to Leaving Certificate) nor GCSE exams (equivalent to Junior Certificate) will take place this year. The Republic’s Minister for Education Norma Foley said she is confident the Junior Certificate can go ahead.

Q: And what about the other sectors?

A: The other big sector which has continued through most of the pandemic since last March is construction. However, all but a small section of the industry will shut down at 6pm on Friday with the situation to be reviewed at the end of the month. The exception is that deemed essential – these projects include social housing developments, schools and the National Children’s Hospital.

A: Unfortunately yes. And this will affect smaller retailers who do not have the capacity to operate online delivery services. The click and collect service provided a big boon to many retailers during the restrictions that were in place in the run-up to Christmas. But the rationale behind the new restrictions is to reduce movement and travel by as much as possible. Invariably, people were driving to retail centres and town centres to collect their purchases. The Government is trying to minimise such movements.

Q: Is the travel ban from the UK and South Africa being lifted?

A: Yes it is. The two highly transmissible new variants have been identified in the UK and in South Africa and many countries have implemented travel bans. An outright ban, said Minister for Transport Eamon Ryan, has not been encouraged by the European Union. Instead, from Saturday the ban will be lifted but it will be replaced by a new regime.

Anyone travelling to Ireland from Britain (but not Northern Ireland) will be required to produce a PCR test (used to detect the presence of an antigen) showing they are clear from Covid (taken not more than 72 hours before arriving). There will be stringent penalties for failure to provide evidence of a test (with fines of €2,500 or six months imprisonments for failure to comply).

A: Only on a limited basis for children of workers who are deemed as essential. It will also be available to vulnerable children. A new category of bubble has been created to assist families in these categories with young children. A household of an essential worker which has no existing childcare arrangements can form a bubble with another household for the purpose of providing childcare.

Q: So what supports will be available?

A: The Government decided at the Cabinet meeting to extend all the schemes to the end of March (Pandemic Unemployment Payment, Employment Wage Support Scheme and supports to businesses that are closed). Tánaiste Leo Varadkar said that a €2 billion contingency fund in the budget will now be used to administer those payments.