Ireland in line for initial supply of 880,000 doses of Moderna vaccine 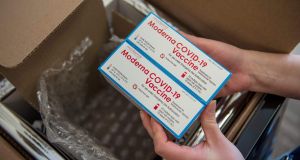 The European Medicines Agency (EMA) has approved a second Covid-19 vaccine, from US group Moderna, for use in EU states, including Ireland. Photograph: Joseph Prezioso/AFP via Getty Images

The European Medicines Agency (EMA) has approved a second Covid-19 vaccine for use in EU states, including Ireland.

Moderna’s vaccine uses the same new mRNA technology as the Pfizer/BioNTech vaccine already being rolled out across the European Union and also requires two injections a number of weeks apart.

The EU has agreed a supply deal with the US company that will see it receive an initial 80 million doses of the vaccine. Ireland is likely to receive just under 900,000 doses under this arrangement on a pro rata population basis.

The European Commission rubber-stamped the EMA approval within hours, the final step before supplies of the vaccines can be distributed.

There is an option to secure a further 80 million doses of the Moderna shot which are likely to be taken up by the EU which is already in discussions with Pfizer to secure additional doses of its vaccine on top of the 300 million already agreed with that company.

“This vaccine provides us with another tool to overcome the current emergency,” said Emer Cooke, the Irish woman heading the EMA. “It is a testament to the efforts and commitment of all involved that we have this second positive vaccine recommendation just short of a year since the pandemic was declared by the World Health Organisation.”

Germany’s health minister Jens Spahn said on Wednesday ahead of the EMA decision that he expected first deliveries of the Moderna vaccine next week. However, a spokeswoman for the company said there was, as yet, no detail on when the first supplies would arrive in Ireland or how many doses would be in that shipment.

Unlike Pfizer, Moderna does not have its own manufacturing capacity and will rely on outsourced production. The vaccine is its first product to secure FDA, and now EMA, approval.

The company is using Swiss group Lonza to supply the mRNA for its vaccine from its Visp site, with German pharma group Corden also supplying raw material from three plants in that country.

The vaccine will be put together at fill/finish plants operated by Spain’s Laboratorios Farmacéuticos Rovi in Madrid and Sweden’s Recipharma at its site in Monts, France.

Moderna says it can produce between 500 million and 600 million doses this year though it hopes to expand that capacity to deliver close to one billion doses by year end. Most of its current capacity is being used to supply the US market.

Approval of the Moderna vaccine gives a big boost to Europe’s hopes of curbing a disease that has infected over 85 million people globally and killed nearly 1.9 million since the first cases were identified in China in December 2019.

Europe began its vaccination drive on December 27th but it has had an uneven start as cases continue to surge across the continent and worldwide, with the World Bank warning that rising infections and delays in vaccine distribution could limit the global economic recovery to just 1.6 per cent this year.

Authorities are also scrambling to contain two more infectious variants of the virus detected in South Africa and Britain which have driven a surge in cases.

Shots from AstraZeneca and the University of Oxford are also anticipated, though it may be some weeks before they’re approved.

After the EMA said last week it hadn’t received enough information to review the AstraZeneca/Oxford vaccine, AstraZeneca submitted a “substantial” data package and said it would work closely with the EMA to support the start of a formal application process.