Settlement costs likely to run to hundreds of thousands of euro 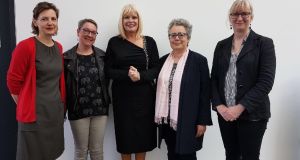 The four NUI Galway lecturers who say they were discriminated against on gender grounds with Minister of State for Higher Education Mary Mitchell O’Connor.

Four female lecturers who say they were discriminated against on gender grounds are set to be promoted as part of a settlement with NUI Galway which is understood to run to hundreds of thousands of euro.

In a statement on Wednesday, the university confirmed that it had reached an "amicable" agreement with each of the four lecturers.

The lecturers, who initiated High Court actions against the university, had argued that they met the qualifications required for senior lectureship posts but were passed over in a promotion round in 2009.

The settlement, the bulk of which involves legal costs, is confidential and required sign-off by the Government, according to sources.

The settlement will allow lecturers and NUI Galway to move on from a controversy which had dogged the institution for years. But the cost to the taxpayer is likely to raise questions over how the matter was handled in the first instance. The university has not commented on the scale of money involved.

The women took their case against the university following a landmark Equality Tribunal ruling in 2014 which found that another lecturer, Dr Micheline Sheehy Skeffington, had been discriminated against on gender grounds.

The college was ordered to promote Dr Sheehy Skeffington, pay her €70,000 in compensation and review its appointments system.

A fifth lecturer who opted for the industrial relations route through the Labour Court was promoted last year and received an undisclosed amount in compensation.

NUI Galway has since moved to address issues around the under representation of women in senior ranks. It has done this by introducing gender quotas for promotion schemes, along with inclusivity and unconscious bias training programmes for managers and staff.

In response to the settlement, Dr Sheehy Skeffington paid tribute to the lecturers.

"I am delighted for them as I know it's been a terrible strain over the last four years," she said.

"It is also thanks to their courage, and the resulting publicity that their cases generated, that all academic women will benefit from radical changes that have been promised for both NUI Galway and for all Irish universities."

NUI Galway has recently been officially recognised for its work in promoting gender equality by securing the internationally-recognised Athena Swan bronze award, which demonstrates a solid foundation in eliminating gender bias.

Latest available figures, meanwhile, show women are significantly under represented in the senior ranks of most of the State’s universities. While just over half of all of lecturers in universities are female, these numbers fall dramatically at higher grades such as associate professor (29 per cent) and professor (21 per cent).