Unveiling of new schools in doubt after subcontractors picket 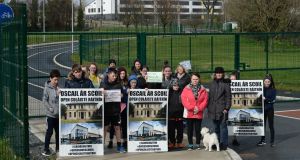 The opening of a number of schools in time for the new school year is in doubt following pickets by subcontractors who say they have not been paid money owed to them for work done.

Coláiste Ráithín and St Philomena’s Primary School, in Bray, Co Wicklow, and Loreto College, Wexford, had been on track to be completed in late August and open in September. However, a number of subcontractors say they are owed hundreds of thousands of euro following the liquidation of Sammon Contracting Ireland earlier this year.

Some contractors who set up pickets and blocked access roads to the new schools in Wicklow and Wexford on Monday have vowed not to leave until they are paid.

All six projects formed part of a €100 million contract that was jointly run by UK firm Carillion, which subcontracted the construction to Kildare firm Sammon.

The liquidation of Carillion in January, and then Sammon in June, have delayed the school projects by several months. Sammon entered examinership in April, citing the “devastating collapse” of Carillion as the main cause in its High Court application.

Individual subcontractors involved in building, landscaping and maintenance say they are owed sums of €20,000-€100,000 and have been forced to let dozens of staff go. It is estimated that up to €14 million is owed to subcontractors across all the school buildings caught up in the controversy.

The Department of Education says it is “unacceptable” that builders involved in a number of new schools have not yet been paid for work they carried out.

While it said the situation faced by subcontractors who have not been paid is very difficult, it said it would be “regrettable” if there were now further delays in the opening of the schools, given that neither the schools nor the department were party to the contracts in question.

A spokeswoman for the department said it was aware of difficulties faced by a number of subcontractors who had been engaged by Sammon, but “the Department of Education is not, and was not, party to any contract with these subcontractors”.

The department said the company behind the construction contract for the five schools – Dutch Infrastructure Fund – was working to ensure the school buildings can be opened as soon as possible.

A replacement contractor, Woodvale, has been appointed by Dutch Infrastructure Fund to facilitate the completion of the three most advanced schools in Wexford and Bray by the end of August.