Dublin colleges to merge into technological university in January 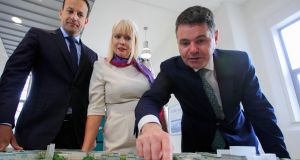 The State’s first technological university - based on the merger of Dublin Institute of Technology (DIT), IT Tallaght and IT Blanchardstown - is set to be the country’s biggest third level institution.

The new university will be developed on three campuses – at Grangegorman, Blanchardstown and Tallaght – and will have a student population of about 28,500.

It will formally known as Technological University Dublin when the change comes into force next January.

Taoiseach Leo Varadkar and three Ministers made the announcement at DIT’s new campus at Grangegorman on Tuesday.

In all, 10 of the State’s 14 Institutes of Technology form part of four separate groups in Dublin, Munster, Connacht-Ulster and the southeast that are bidding to become technological universities.

The Munster bid – which includes Cork Institute of Technology and IT Tralee – is widely expected to be second in line to secure the status.

“Technological universities are central to delivering on this vision and will stimulate a more balanced growth of population and employment across Ireland, ” he said.

“The ambition is simple: to drive regional development and provide more opportunities for individuals, enterprise and the community.”

Minister for Education Richard Bruton said “TU Dublin” has the potential to be ground-breaking by providing a flexible teaching and learning framework to students.

“This is an opportunity to build a new higher education system that is inclusive and reflects the educational demands and economic needs of Ireland,” he said.

Prof Tom Collins,chair of the three institutes’ governing bodies, said the designation was the culmination of seven years of hard work.

“The process of engaging with the independent international panel that visited Dublin in May gave us the opportunity to highlight the potential for TU Dublin to be ground-breaking by providing a pioneering and practice-based, research-informed learning framework to students,” he said.

While the creation of technological universities attracts widespread political support, senior university sources have expressed alarm at what they say is the dilution of criteria for institutes seeking the new status. They fear this could damage the international reputation of higher education.

The Department of Education, however, has insisted there has been no “dumbing down” of standards required for institutes of technology to secure new technological university status.

In the meantime, Minister of State for higher education Mary Mitchell O’Connor said a draft order is required to be placed before the Oireachtas for approval in the forthcoming legislative term to appoint the day in early January on which three institutions will be dissolved and the new Technological University Dublin is established.