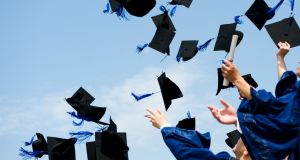 New figures show the extent of the “class gap” in higher education with students from fee-paying schools far more likely to attend a handful of top Dublin-based universities.

Students from fee-paying schools account for 20-25 per cent of undergraduates at Trinity and UCD.

By contrast, they account for less than 1 per cent of students at institutes of technology in Athlone, Galway-Mayo, Tralee, Letterkenny and Waterford.

Geography is a clear factor, given the majority of second-level fee paying students are in the south Dublin area.

However, the social divide is also stark when enrolment numbers are broken down by students from disadvantaged areas or Deis schools.

Disadvantaged students account for 20-30 per cent of undergraduates at institutes of technology in Blanchardstown, Tallaght, Tralee and Letterkenny.

The proportion of Deis students at Trinity and UCD, by contrast, is below 5 per cent.

The figures are contained in a study by the Higher Education Authority and relate to the 2015/16 academic year.

The social divide in the enrolment patterns to third level are likely to lead to a fresh focus on whether top universities are doing enough to attract students from more disadvantaged areas.

The Government points out that it is funding a range of programmes to boost the numbers of “under-represented groups” at third-level institutions.

For example, a three-year national access plan, published by the Higher Education Authority in 2017, aims to increase the number of students with disabilities and mature students who have never been to college at third level by 1,500.

Individual institutions also have targets, as part of funding agreements with the Higher Education Authority, for the proportion of students from disadvantaged or non-traditional backgrounds to enrol in a given year.

Institutions such as Trinity and UCD have been exploring different approaches to boosting these numbers.

A recent Trinity study, for example, found that secondary students in poorer areas of Dublin were three times more likely to plan to go to college after being assigned a mentor.

Other research shows that students from disadvantaged backgrounds face a much bigger challenge in staying in third level once they get there.

A recent HEA study found the rates of students who fail to progress beyond the first year of their college course is almost double for students from Deis schools compared to fee-paying schools .

While 19 per cent of students from Deis schools failed to progress, this compared to 10 per cent from fee-paying schools.

Research indicates that academic performance and financial considerations are some of the key factors which help determine if students progress.

Overall, the third level institutions with the highest proportions of fee-paying students are the Institute of Art, Design and Technology in Dún Laoghaire and Trinity (24 per cent), UCD (23 per cent), the National College of Art and Design (17 per cent), DIT (15 per cent) and UCC (8.2 per cent).

The third level institutions with the highest proportions of Deis students included institutes of technology in Letterkenny (28 per cent), Tallaght (23 per cent), Blanchardstown and Tralee (21 per cent) and Waterford (15 per cent).