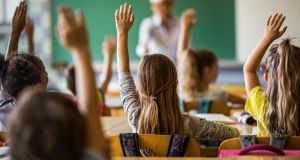 Minority faith schools are legally permitted to discriminate on the basis of religion in their admission policies. Photograph: iStock

A principal has resigned from a Church of Ireland primary school in protest over moves to prioritise the enrolment of children who are actively involved in the parish and attend church services.

Minority faith schools are legally permitted to discriminate on the basis of religion in their admission policies, which tends to involve the production of a child’s baptism certificate.

However, principal Eileen Jackson has resigned from St Patrick’s National School in Greystones, Co Wicklow, on the basis that it appears to be taking a “new direction” by making admission to State-funded education a “collateral benefit of parochial engagement”.

The school’s admissions policy states that priority access will be given to children who are “accustomed members” of the Church of Ireland parish of Greystones.

Admissions on this basis require the signature of the rector, who signs off whether the child is an active member of the parish.

Ms Jackson, who has been principal of St Patrick’s National School in Greystones for more than 20 years, informed parents in an email that she felt the Church of Ireland ethos required it to embrace diversity given the church’s “core values of freedom of conscience, tolerance and inclusivity”.

“I made this difficult decision with considerable regret,” she wrote. “I have become increasingly concerned at our departure from belief in, and commitment to, core elements of Church of Ireland ethos.”

Rev David Mungavin, the local rector and member of the board of management, declined to comment. Ms Jackson was also unavailable for comment yesterday.

It is estimated that about 60 per cent of the school’s 280 children are Church of Ireland members, with the remainder of other faiths and beliefs.

An online petition, meanwhile, has been set up by parents to express support for Ms Jackson. It had almost 300 signatories by Sunday evening.

It also notes that the school’s board of management turned down an extra teacher which the school was entitled to last year, which it says would have reduced pupil-teacher ratios.

The issue of religion and school admission has become a highly contested issue over recent years.

Earlier this month, the Government passed legislation which removes the so-called baptism barrier for entry into Catholic primary schools.

However, minority faith schools will continue to be permitted to discriminate in favour of children on the basis of their religion.

Greystones-based Social Democrats councillor Jennifer Whitemore said all children should have access to State-funded education, regardless of their religion. “The recent legislation did not go far enough when it came to protecting this principle,” she said.

“The time has come for a national conversation about providing a totally secular education for our children and to hand responsibility for faith formation back to parents and the religious community.”

Minister for Education Richard Bruton said the exclusion was to allow minority faith schools – on the basis of their small size within the overall population – to maintain the ethos of their schools.

He said minority faith pupils could find it extremely difficult to access schools of their own religious ethos if the baptism barrier was removed for all schools.