Almost 700 fewer primary teachers will be required between 2019 to 2021, review finds 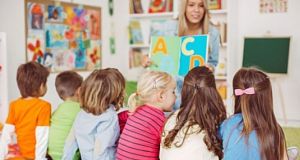 The most likely scenario is that up to 696 fewer primary teachers will be required between 2019 to 2021 as a result. File photograph: Getty Images

Hundreds of primary teachers will be surplus to requirements over the coming years due to falling numbers of projected pupils, according to a spending review of the education system.

While the enrolment at primary level has been growing for almost two decades, a Department of Public Expenditure report says primary enrolments are projected to peak this year and will gradually reduce until at least 2025.

The most likely scenario is that up to 696 fewer primary teachers will be required between 2019 to 2021 as a result.

At national level, it says the reduction can be met through the non-replacement of retirees.

However, it says redeployment – which involves the transfer of teachers from one school to another where vacancies exist – will play a critical role.

Only permanent or teachers with contracts of indefinite duration are eligible to be redeployed. Schools typically nominate teachers for redeployment on a “last in, first out” basis.

In the forthcoming school year, for example, a total of 177 teachers are due to be redeployed due to changes in school enrolments or school closures. Most are typically within a 45km radius of their current place of employment.

At second level, by contrast, the report projects that enrolments will continue to rise until 2024, reaching in excess of 400,000 pupils. This would be up 12.5 per cent over current levels.

It identifies a projected demand for an additional 1,201 second level teachers from 2019 to 2021.

“As the demographic needs shift, there is a need to reprioritise existing resources towards second level and ensure resources are targeted in the most efficient and effective way to address these pressures,” the report states.

Overall, the report notes that expenditure in education is due to reach more than €10 billion this year, or 16 per cent of total public service expenditure.

In a separate spending review on the funding needs for higher education, the report notes many Irish workers are overqualified for their jobs.

It says research shows the proportion of workers reporting education or skill levels in excess of those required to do their job is among the highest in the EU.

This, it says, can have potentially adverse impacts for individuals, firms and the economy.

It also finds that demand for third-level places is expected to continue to increase for the next decade or so.

But it cautions that more detailed figures are needed to examine the real funding needs of the sector.

An expert group led by former trade union leader Peter Cassells concluded two years ago that the sector needed an additional €1 billion by 2030.

This was based on a student staff ratio of 14:1, a widely used international benchmark for education quality.

The report, however, says there are “limitations with using such a ratio, across a diverse sector, as a basis for estimating funding needs”.

It says more “evidence-based, system-wide, outcome-focused indicators” are needed to measure the quality of education.

The report also notes that the most recent demographic projections - produced in November 2015 – ended up understating the number of non-EU students and overestimated the number of mature students entering undergraduate study.

The report also says more transparency is needed to determine the income that is privately generated by universities.