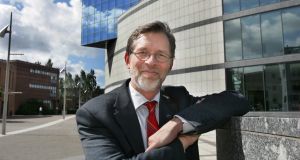 Former DCU president Ferdinand Von Prondzynski has been at the centre of a conflict of interest row at a Scottish university. Photo: Matt Kavanagh

The former president of Dublin City University is at the centre of conflict-of-interest row at a Scottish university after his business partner was appointed to a top role at the institution.

Professor Ferdinand von Prondzynski, who is the principal of Robert Gordon University in Aberdeen, is director of a company involved in the ownership of a €13-million castle in Ireland which was put up for sale at the end of last year.

Knockdrin Castle, in Co Westmeath - which sits on 1,000 acres of land - has been the home of the von Prondzynski family since the 1960s.

An internal inquiry at the Aberdeen university found that neither Prof von Prondzynski nor Prof Gordon McConnell had disclosed their business relationship.

While they were found to have breached the university’s conflict of interest policy, it concluded that it was a “genuine omission or oversight” with no “malicious motive”.

It also found that the failure to disclose the co-directorship “did not have a consequence on the outcome of the recruitment process” involving Prof McConnell.

However, the university’s decision has prompted another senior academic to quit in protest.

Professor Paul Hagan, vice-principal for research, said he could not see how the board had reached the conclusion.

“The deficiencies in the appointment process cannot be repaired retrospectively and I cannot agree with the minimal action the board has decided upon,” he wrote in a resignation letter, published in a regional newspaper, the The Press and Journal.

He said it left him in “an untenable position”.

“So reluctantly, I will now begin the search for an alternative role elsewhere in the sector.”

The inquiry is understood to have been launched after a whistleblower highlighted business connections between the two.

A statement following the inquiry by the university said: “Both Professor von Prondzynski and Professor McConnell acknowledged their error to the investigation panel and apologised for their failure to declare the information, expressing deep regret.”

The board also noted the “significant contribution that Prof von Prondzynski and Prof McConnell make to the university’s success and reiterated their confidence in RGU’s strategic direction under the leadership of the management team”.

The only sanction for the former DCU colleagues is that they will be “required to re-familiarise themselves with the university’s ethics and conflict of interest policy” and to “formally discuss the outcome” of the probe with the board.