My son has dyslexia. Should he drop subjects?

Ask Brian: The move from first to second year can be a big step up for some students 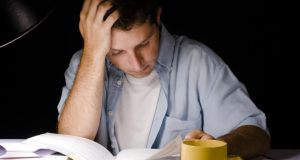 Don’t be despondent in any way that reducing his subjects at this stage will limit his choices in the future. Photograph: iStock

My son – who is in second year – has dyslexia and is struggling to keep up with most of his subjects. This is despite the special-needs support he receives at school. His principal has suggested he drop one or two subjects and receive one-to-one tuition with the spare time. I’m not so sure this is a good idea. Could you help?

The level of difficulty children experience as they move from first to second year at second level can be a major step up for many academically weaker students.

Your son’s school management team seem to have responded very quickly to your child’s difficulties. This is a very good sign of their concern for every child in their care and an indication that you have selected the right school for him.

Their suggestion that he drop a couple of subjects and spend the freed-up periods in one-to-one support in the subjects he continues to study is an educationally and developmentally good one.

The alternative is that he becomes more and more despondent and comes to feel negatively about attending school at all.

At such a young age it is difficult to decide which subjects he should drop at this stage. With a diagnosis of dyslexia, I presume he has secured an exemption from the study of Irish, which can be extended to the study of continental languages in the case of university entry, if that were ever to become an issue in the future.

Some children with dyslexia, however, thrive at spoken languages, and with 40 per cent of the marks awarded in Irish now allocated to the oral, it should not be taken as a given that languages are the first subjects a dyslexic child should drop.

It’s probably best to take the advice of his teachers , in consultation with your son. I am sure that your son has his own strengths. He may be artistic or musical, enjoy technology, engineering or drawing. He may do better in subjects with a lot of visual content such as geography or the biological portion of the science programme. He may have an aptitude for the real-world aspects of the business programme.

The key point to bear in mind is to involve your son fully in the decision-making process so he recognises that the decisions now being made will not in any way limit his future career options.

Many children in your son’s situation go on to progress through further and higher education to PhD level in their chosen field. So, don’t be despondent in any way that reducing his subjects at this stage will limit his choices in the future. It will probably result in you having a far happier child around your home in the years ahead.

Email your education queries to askbrian@irishtimes.com