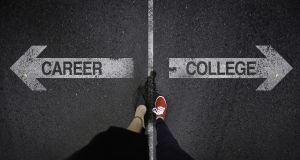 The fact that 16 per cent of school-leavers do not apply for a CAO college place is not an indication of failure. They may be planning to pursue a further-education course, which is more appropriate to their career goals. Photograph: iStock

To make sense of the feeder tables, it is important to understand its component parts, and in particular, the two key numbers associated with each school listed: the total number of students attending college this year, and the total number of incoming first-year undergraduate students who sat the Leaving Cert in 2018.

When reading the tables, it is worth noting the percentage in the last column is not a “true rate” for the progression of the Leaving Cert 2018 class from each school to college this year as it incorporates a number of different elements.

Each of these students, excluding those who did not sit the Leaving Cert in Ireland, is included in the total number of students credited by colleges to each school. We publish this number because it is all that CAO colleges are allowed to provide. They are precluded from stating how many students from the class of 2018 secured a place this year.

The remaining 3,000 foreign national students lived and studied outside of the Republic of Ireland prior to securing their CAO place, and therefore did not sit the Leaving Cert in one of the schools listed in the accompanying charts.

How is this reflected in an individual school’s progression rates?

If we examine this from an individual school’s perspective, for every 100 students credited to your average school, 75 did the Leaving Cert in 2018, with 25 having taken it in previous years.

Therefore, the number 100 in this example, although reflecting the number of former pupils of that school starting college in 2018, is not an accurate reflection of the progression of this year’s school-leavers.

Some of those 25 incoming first-year students, who did not sit the Leaving Cert in June 2018, credited to their original second-level school, are entering college for the second time, having dropped out previously, and are therefore being credited to the school twice.

Some schools credited with extremely high progression rates in the accompanying charts, may be securing these high numbers through the fact that a significant number of their past pupils have dropped out of college at their first attempt, and are now re-entering on a new degree programme.

Class of 2018 who progressed to college through the CAO

Information on the number of students from any school’s current year’s Leaving Cert class, who applied to or secured a place through the CAO is not available.

Instead, access to the State Exams Commission (SEC) figures on the number of students who sat the Leaving Cert in that school in 2018 (the SITS) is used, which allows the publication of this number next to each school’s name.

CAO figures show 84 per cent of sixth-year students in Irish second-level schools sought a place among the 45 institutions it covers. The remaining 16 per cent of each year’s Leaving Cert class, have decided – in consultation with their teachers, guidance counsellors, and most importantly, their parents – that applying to the CAO is not the appropriate or best career development move for them.

As access to accurate data for application numbers to the CAO from the individual schools themselves is not possible, The Irish Times includes this cohort in the SIT numbers, upon which the success percentage of each school is based.

It is worth noting that the fact 16 per cent of school-leavers do not apply for a CAO college place is not an indication of failure. They may be planning to pursue a further education course, through an ETB college, which is more appropriate to their career goals.

Every year, thousands of Leaving Cert students take these level 5 QQI courses in post-Leaving Cert colleges. Many complete them and progress to CAO courses the following year (and are credited back to their original school in the data supplied by the colleges when they register).

Another cohort from that 16 per cent who do not apply for a CAO place may be going outside Ireland to continue their studies. They may also have applied to colleges in Northern Ireland or to colleges in the UK.

In the past eight years, a growing number of Irish students have opted to study in continental EU universities with high international rankings, which offer courses through English.

There are more than 1,000 undergraduate Irish students now studying in Dutch universities alone. Thousands more attend colleges in other EU countries. Again, these students are not credited to their schools for progression to third-level status in the Irish Times charts as we do not have any data on such students.

Each year, the tables show very large numbers of students who go to college attended schools in socially advantaged communities. The data shows these students tend to opt predominantly for universities and teacher-training courses.

Higher Education Authority (HEA) data shows these institutions have the lowest drop-out rates (from 4 per cent in teacher-training colleges to 9 per cent in universities). Is that surprising, given the supports these students receive from their parents?

The HEA data also shows students from schools in less-advantaged communities get far fewer places in high-points university courses and tend to progress to institutes of technology. HEA data shows these students have more difficulties completing college, with drop-out rates of up to 20 per cent common.

The progression tables also show how parochial our college choice is, and how the presence of a third-level college in an area increases the progression rates of students from second-level to third-level within commuting distance of those colleges. Unlike in the UK, where students tend to select colleges far from home, Irish students gravitate towards local colleges if they can get a place in the discipline they want. This may reflect the lack of a student-loan scheme which would allow consideration of a wider range of options and may also reflect the acute ongoing shortage of student accommodation, with recent reports indicating that up to 10 per cent of students are couch-surfing or, in some cases, sleeping in cars.

Publishing this data is not passing judgement on the success of any school in supporting their students to get to college. For schools where both parents of many students are graduates, and where they have been supported throughout their education, getting a college place is no great reflection on the success of their school. Alternatively, we are keenly aware that for schools in disadvantaged communities, securing third-level progression for even a small proportion of students reflects highly motivated teachers, and is a fantastic achievement.

One of the most interesting pieces of data relating to schools’ success in supporting students from financially disadvantaged backgrounds can be seen in the JP McManus scholarship awards.

The awards, established in 2008 and worth €6,700 a year to each student, are given annually to Ireland’s best performing students for the duration of their undergraduate degrees.

A total of 125 All Ireland Scholarships from the 32 counties are awarded each year and this year will see the total number awarded to date rise to 1,371. Some 656 successful graduates have already qualified with primary and post graduate degrees under the scheme.

Having attended the awards ceremony in UL for the past five years, I have been struck by the large numbers of award-winners whose families have only come to live in Ireland in the past 15 years.

More than 50 per cent of the 125 award winners in 2018 secured 600 points, with nine students securing the maximum 625. The schools who helped these students secure these grades may not appear at the top of the best-performing schools lists, but they are teaching the students in their care to the highest possible standards.

Why does ‘The Irish Times’ publish these charts given the number of caveats involved?

The Irish Times publishes these progression charts annually because they are based on data provided by the State Examinations Commission – total number of SITs per school, and the third-level CAO colleges – total number of former past pupils of each school attending first year in 2018. Even if the charts are flawed, they are the only indicator of schools’ academic performance available to readers.

Third level colleges point out that this schools data originates at the State Examinations Commission. It is forwarded to the Central Applications Office, who forward it to third level institutions. As the data is provided to each university for particular administrative purposes, they say they cannot stand over the accuracy of the data if it is used for any other purpose.

The data provided includes every school setting in which a candidate sat the examination, even if only for one subject.