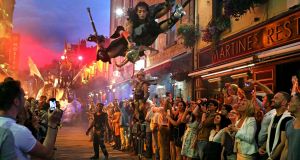 Galway City Council has appointed two leading academics to oversee the preparation of a seven-year language plan to increase the use of Irish in Galway City.

Galway is the first Gaeltacht Service Town - towns not located in the Gaeltacht but that have a significant role in providing essential services to Gaeltacht areas - to see the introduction of an Irish language plan.

Dr Walsh said the project team was hoping to build upon the goodwill that already exists in Galway towards the Irish language.

“It is an exceptional city. Galway is the only large urban area in the country in which bilingualism exists to any real extent. There are more people here, according to the Census, who say they can speak Irish.”

“Galway has a multiple of active language groups. A lot of people are learning Irish in the city. We hope to build on the goodwill and on the awareness that is possibly more prevalent here than elsewhere in the country.”

Dr Walsh said the project will include a review of existing research material and international best practice as well as an extensive consultation exercise.

He said the research team hopes to gain a better understanding of the needs and requirements of the Irish language networks already in the city. This would include measuring the views of the wider public and those that avail of services being offered by groups such as Gaelscoileanna and other organisations.

Local businesses and service providers including health care providers and local authorities will also be consulted.

The implementation of projects that arise from the plan would be dependent on future funding, he said.

“We cannot perform linguistic miracles without resources. We will be making recommendations and it will then be up to the authorities if they want to support those recommendations,” he added.

Dr Walsh said it was “too early” to say how success of the plan would be determined but said he hoped to find ways of measuring the progress of Irish language groups in the city.

“If those who implement the plan learn in a year or two that parents who are raising their children in Irish feel they have better supports available to them that would represent significant progress.”

Galway City Council Chief Executive, Brendan McGrath said: “Galway City Council is very pleased to be involved with this initiative for Galway city. It will provide an effective structure and a resource base for sustainable Irish language planning in Galway city for the period 2019-2026 and beyond.”

Coiste Stiúrtha Pleanála Teanga Gaillimh, a steering group representing a cross-section of the public, private and voluntary sectors was formed by Gaillimh le Gaeilge and Galway City Council to oversee the progress and delivery of the plan. The group will work with the appointees to facilitate delivery of the plan.

Cathaoirleach (chairperson) of Gaillimh le Gaeilge, Bernadette Mullarkey, said: “This is an exciting time ahead not only for the Irish language but also for Galway City. As members of CSPT Gaillimh, we look forward to working closely with Dr John Walsh and Dr Dorothy Ní Uigín as we engage with the people of Galway to set out a range of practical, cost-effective, achievable initiatives with a specified timeframe in the plan.

“The clear objective of the plan will be to further promote, support and increase the communicative use of the Irish language as a norm in everyday life as well as delivering on Galway’s status as Ireland’s Bilingual City.”

Dr John Walsh is a Senior Lecturer in Irish at the School of Languages, Literatures and Cultures, specialising in sociolinguistics. Dr Dorothy Ní Uigín, is Acting CEO of Acadamh na hOllscolaíochta Gaeilge, at the National University of Ireland, Galway.