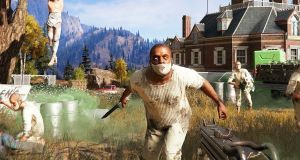 Top-selling games in the run-up to Christmas include a host of over-18s titles including Far Cry 5, above

Parents have been warned to check age restrictions on computer games after new research found a third of eight-year-old boys were playing over-18s games with violent and sexual imagery.

The warning comes ahead of major sales events such as Black Friday and Cyber Monday, when many parents buy games for their children.

An Irish education technology firm based in UCD surveyed the digital behaviour of almost 7,000 primary school pupils between September and November.

Zeeko found that about 33 per cent of boys in second class had played over-18s games online. This figure rose to 60 per cent by sixth class. Boys were three times more likely to have played these games online than girls.

Joe Kenny, founder of Zeeko, said researchers were surprised at the scale of access among young boys to inappropriate content. While he said most parents would never allow their children to access over-18s movies in the cinema, there seemed to be double standards when it came to computer games.

“Hopefully by sharing this finding now it may encourage parents, and indeed older siblings, to be more vigilant and to think carefully when purchasing games online,” he said.

Top-selling games in the run-up to Christmas include a host of over-18s titles including Far Cry 5, where players do battle against a doomsday cult, Red Dead Redemption 2 and Call of Duty: Black Ops 4.

Zeeko’s latest in-school research also shows children now have access to the internet earlier than used to be the case.

They start accessing the internet on average at six to seven years of age, with about 15 per cent of primary school children spending one to three hours per day online during weekdays. This increases to more than five hours online in 16 per cent of cases at weekends.

Studies on the impact of computer game violence by research institutes, universities and psychologists have been inconclusive. While some reports link video games to violence, others dispute these findings.

However, latest psychological studies have found that as violent games become more realistic, constantly playing them can lead to a desensitisation to real violence.