Universities have failed to appoint a female president for 426 years, says Minister 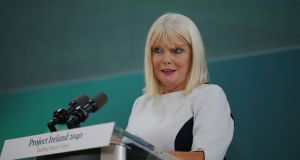 The fact that there has never been a female university president in 426 years is a sign of how far the sector needs to go achieve gender equality, a Government Minister has said.

Mary Mitchell O’Connor, the Minister of State with responsibility for higher education, said latest figures showed that while women made up half of the staff at third level, only a quarter of university professors were female.

The proportion of women professors also ranges dramatically across different colleges, from a low of 12 per cent to a high of 31 per cent.

“This inequality cannot be attributed to the absence of skills, abilities or the aspirations of women,” she said.

“Rather, the inequality exists as a result of multiple systemic barriers in the organisation and in the culture of our institutions.

“Institutional leadership must recognise this, and that they need to fully build a culture in their institutions of equality, diversity and inclusion.”

Ms Mitchell O’Connor, who was speaking at a gender symposium at the Royal Irish Academy on Wednesday, said she will “not accept the slow progress that has been happening” in the sector.

She also spoke of her personal experience of obstacles in the predominantly male world of politics.

“I have been talked down to, talked past and patronised,” Ms Mitchell O’Connor said.

“Higher education institutions have a responsibility to ensure that all of their staff have equality of opportunity.

“Responsibility rests with the leadership in our institutions to create successful organisational change.

She also said leadership in our third-level institutions must be held to account over their progress in their area.

Ms Mitchell O’Connor said she has established a gender equality taskforce to tackle the “lack of urgency to see real and meaningful change” around these issues.

The taskforce, she said, has identified good practice and highlighted areas that needed improvement within a three-year period.

“Higher education institutions will be expected to take steps to improve their systems in a specified timescale,” she said.

“This can be no ‘tick box’ approach... Substantial progress can only be achieved when there is a significant enhancement in the environment of each and every one of our institutions to gender equality.”