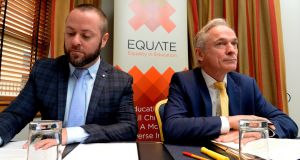 A civil society group which lobbied in favour of removing the so-called Baptism barrier from Irish schools says a campaign of “groundless” complaints was partially to blame for its shutdown.

The organisation says internal documents released under the Freedom of Information Act show the commission was satisfied with Equate’s responses and the complaints were closed.

However, Equate says difficulties in fundraising due to the probe meant the organisation was forced to wind up after just over two years.

The Irish Council of Civil Liberties says Equate’s experience raises much wider issues around how civil society organisations risk being strangled due to flaws in the Electoral Act.

At a press conference on Thursday it said it would raise examples of how other civil society groups, including Education Equality and Amnesty International Ireland, have been negatively impacted by commission inquiries.

The Electoral Act forbids anyone engaging in “political” work from accepting any donations from abroad, anonymous donations above €100, or donations of more than €2,500 from any one source.

The ICCL says the Act’s definition of “political” is so wide that it includes the general advocacy work of many organisations.

This, it says, is how the commission has been interpreting this term, with its investigations often originating in complaints by third-parties who disagree with the work of civil society organisations.

Liam Herrick, director of the ICCL, said: “ The experiences of Equate and other NGOs demonstrate how easy it is for individuals to target the work of an organisation they don’t like.”

He said was “unquestionably the case” that were the Electoral Act to properly function as it reads, civil society participation in public debate would effectively come to an end.

In a statement, Sipo declined to comment on individual cases but said it had on numerous occasions called for a review of the Electoral Act.

Sherry Perreault, Sipo’s head of ethics and lobbying regulation, said it was on record as stating the obligation for third parties to register should be triggered by expenditure on political activities over a certain threshold, and not by the receipt of donations for political purposes.”

Ms Perreault said it was for the Oireachtas to determine what, if any, changes to make to the Act.

“In the absence of any change to these provisions, the commission has a statutory responsibility to administer the Act as its stands,” she said.

Michael Barron, Equate’s former executive director, said his group’s work was never “electoral” in nature and felt the law’s application to a small Irish NGO working on education issues was unwarranted, he said.

“Now, with the release of these records, it is clear that both the application of the law, as well as the procedures followed by the Standards in Public Office Commission towards us, were disproportionate and deeply unfair.”

He said Equate received up €200,000 annually over the course of two years from the One Foundation, an Irish philanthropic organisation.

Mr Barron said the group was unable to raise further funds as it felt obliged to inform potential donors of Sipo’s inquiries.

“I believe that something fundamental needs to change so that the Electoral Act can no longer be used against legitimate and effective organisations like Equate,” he said.

“Organisations challenging social inequalities should not be put in a position where they can be targeted by persons or organisations with vested interests in maintaining the status quo.”