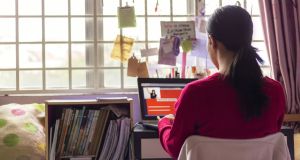 In a letter to parents, seen by The Irish Times, the principal of the north Dublin school said a minority of students were deliberately sharing invites needed to join the Microsoft Teams-hosted classes. File photograph: iStock

A Dublin secondary school is temporarily suspending online teaching due to a number of incidents where “unauthorised persons” were given access to live classes.

The school said it was not prepared to “jeopardise the health and safety or wellbeing” of staff and was temporarily ceasing live classes until January 26th.

In a letter to parents, seen by The Irish Times, the principal of the north Dublin school said a minority of students were deliberately sharing invites needed to join the Microsoft Teams-hosted classes to unauthorised persons.

The school has contacted the Garda and is seeking to identify the students involved in consultation with IT experts.

“We have intercepted this violation at an early stage but it has presented us with an issue that must be dealt with decisively owing to the precarious situation it is placing our staff and students in,” the principal states in the letter.

He said a staff meeting will be held on Monday to discuss the issue and to draw up new protocols around live classes.

The principal said the focus of the school’s inquiries are based on a small number of students in two year groups.

“We are very confident that all our efforts will lead us to identifying the people involved and the full focus of our school policies will be invoked,” the letter states.

The principal said that, otherwise, online teaching at the school has been “very successful” to date with student engagement rates in live classes in excess of 90 per cent.

“We are very proud of this achievement which has ensured the continuity of teacher and learning for our school community.

“We will not allow our good practice to be compromised by a small minority of students. We will expedite every effort to ensure that we will return to online teaching and learning safely without fear of interruption.”

It is the second high profile incident where a school has been forced to shut down live classes due to security concerns.

A Co Meath school was forced to shut down a video class earlier this month after a number of men gained access to the class and acted in a lewd manner.

The entry by people who were not members of the class or the school community occurred after they obtained a link needed to join the Microsoft Teams-hosted class on January 13th.

The men could be seen by the second-year students from the school. Teachers immediately shut down the class.

The Garda and Tusla were alerted by the school’s patrons, the Louth Meath Education and Training Board (LMETB).

In a statement, LMETB said the “ behaviour of these individuals was such that the teacher terminated the class. The school took immediate action to respond to this incident.

“As a precaution the school also suspended the use of online classes pending a review of the circumstances by our ICT team. The parents and guardians of all second-year students were informed.”

The Department of Education was also notified, as were all other schools under the patronage of the education and training board.

It said extra digital settings have since been introduced:

“LMETB is disappointed that the entire school community’s efforts to support remote learning during this time of national crisis should be undermined by such mindless behaviour,” it said.

“However, we remain determined to play our part in the fight against Covid by continuing to provide remote-learning opportunities and by supporting our school communities.”